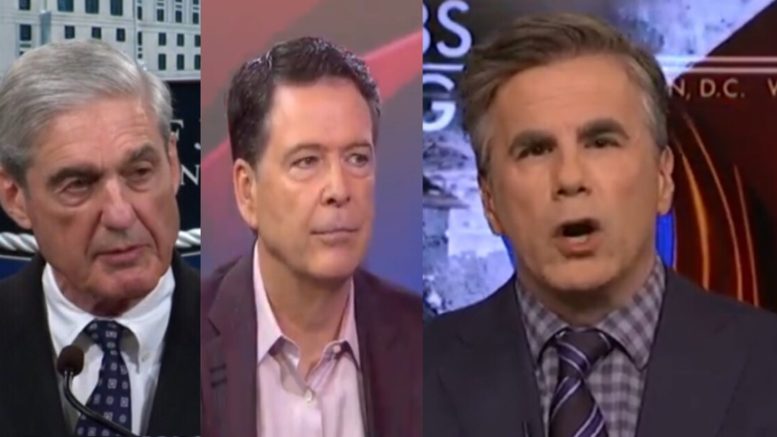 Judicial Watch President, Tom Fitton, suggested on Wednesday that it’s time to investigate Robert Mueller for claiming “wrongdoing by an innocent person without any foundation.”

Asked about Mueller’s performance on Wednesday, Tom Fitton said, “Well, I don’t know what reputation he had that deserved any credence until now, but it’s no longer there.”

“He’s really destroyed whatever reputation he’s had with this political attack on the President, turning the rule of law on its head, suggesting the President is guilty and, because he can’t prove otherwise, we should conclude that he should be impeached,” he continued.

Fitton called it “an abuse of power,” by the Special Counsel and that Mueller personally came out and “endorsed this abusive attack on the President– doubling down on the report.

The Judicial Watch President said that Attorney General William Barr has been “too deferential” to Mueller and should have “shut down” the “report before it was even written.” (Continued Below)

“[I]t’s been abuse piled on top of abuse targeting President Trump,” Fitton said. “And this Mr. Mueller, he needs to be investigated as well. The office of professional responsibility should be asking, ‘Why did this Justice Department prosecutor come out and suggest wrongdoing by an innocent person without any foundation?’ Because there is no foundation. If there was a foundation, there would have been indictments or requests for an indictment while highlighting that. Outrageous.”

Dobbs and Fitton also discussed Mueller and former FBI Director James Comey relationship and the possibility of collusion between the two.

Asked if it was a coincidence that Comey wrote an op-ed a day ahead of Mueller’s press briefing, Fitton said, “I’m trying to figure out who’s worse in turns of ethics: Comey or Mueller. They’re two peas in a pod when it comes to attacking President Trump. (Continued Below)

Fitton believes Mueller should absolutely testify and laid down questions he should be asked.

“Why is it, despite his conflicts did he accept this appointment? Why is it, despite knowing that Comey stole FBI records and then leaked them illegally to get him appointed– he continued to participate in that corrupt process? What about all these biased Democrat and anti-Trump, pro-Hillary Clinton donors he hired? When did he know there was no collusion? And why didn’t he shut it down then? Fitton asked.

“And this is why there needs to be at least an internal ethics investigation of the way the Mueller operation proceeded and its interaction with some of these witnesses,” Fitton said.

“You know, Mr. Mueller, for instance, Strzok was caught red-handed writing these anti-Trump texts, these pro-Hillary Clinton texts. Strzok testified, Mueller didn’t ask him one question about whether or not his anti-Trump hatred influenced the investigation. Mueller was disinterested in that. Isn’t that curious?” He wondered.

“This was about as political an intervention in our system as any Justice Department employee’s ever done,” Fitton concluded. (Video Below)

(Related: Levin Reacts To Mueller’s Briefing: ‘This Whole Damn Thing Has Been A Setup’)