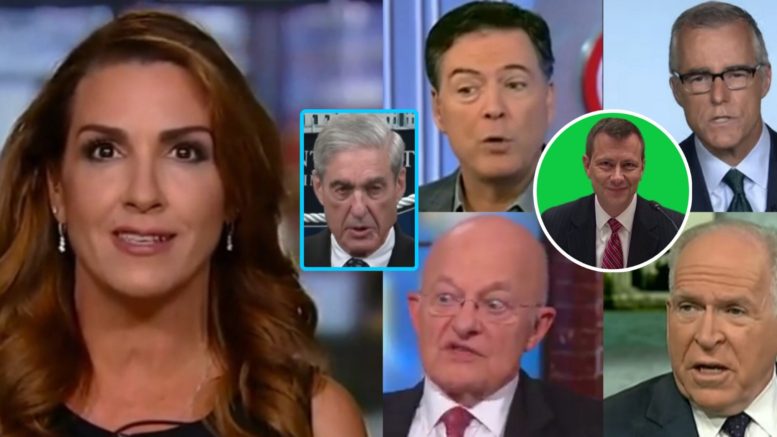 This comes after the Mueller report drama unfolds, but now the attention has turned to the other pending investigations into the origins of how the probe began in the first place.

During the interview, Tom Fitton and Sara Carter explained that Robert Mueller turned out to be a partisan hack and described why it’s time to investigate the investigators.

“You would’ve thought [Mueller] would’ve been above the fray, but his press conference this week showed that he was out for Trump. He suggested [Trump] was a crook and needs to be impeached without basis. And he took this approach [of]… ‘I think, he may have committed a crime… I’m not sure, but I can’t prove he’s innocent,” Fitton said.

Fitton suggested that Mueller’s comments “turns the rule of law on its head”.

He continued, “People like President Trump are presumed innocent and to suggest otherwise, from the podium of the Justice Department, is a wild abuse of power. That’s the Alice in Wonderland approach to justice; sentence first, verdict later.” (Continued Below)

Fitton said that Robert Mueller wants to “sentence” President Trump to impeachment and explained that it is inappropriate behavior for the Justice Department. “There certainly needs to be an ‘ethics investigation’ into what went on with [Mueller’s] statement and frankly, and ethics audit of the entire Mueller operation,” he urged.

Talking with her sources, Sara Carter explained what is going on within the swamp: “They’re deflecting. They absolutely know that President Trump did not commit a conspiracy. There was no obstruction, but they have to focus on that. They have to push everything in the direction,” Carter said.

She clarified, “Because now the Attorney General and the Department of Justice have a magnifying glass on all of these former Obama officials who basically violated the law, from what we can see, based on the evidence that’s out there already, evidence that we’ve already seen.” (Continued Below)

Carter went on to say that James Comey, John Brennan, James Clapper, Andrew McCabe, Lisa Page, and Peter Strzok including others possibly involved, along with bureaucrats, are “done.”

“They are no longer in their positions of power. But you had people that worked for them, people that were part of their group that are still trying to protect them, and that’s exactly what Mueller is doing,” she said.

Carter explained that when Mueller gave his press conference he did so to “rally up the Democrats” and said that he did it on purpose because “they are now fighting for their lives.”

“They are fighting to stay afloat because they know they can be charged. Mueller is a smart man, and he knows exactly what he was saying. What he didn’t count on is that he has Attorney General William Barr, who isn’t willing to back down and isn’t going to take him on publicly,” she added. (Video Below)