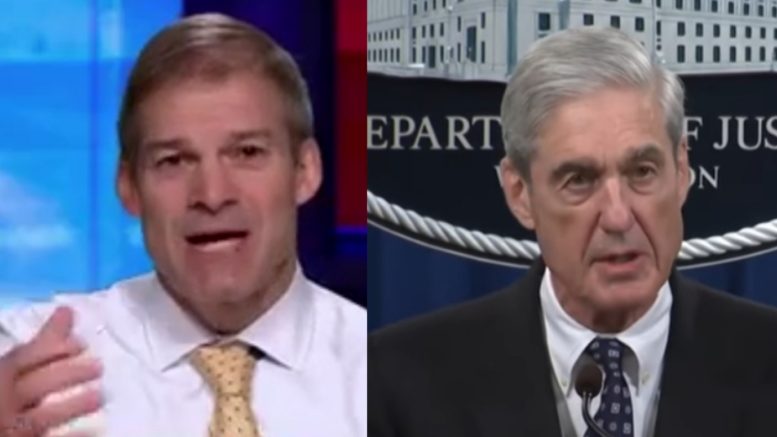 It’s still up in the air if Robert Mueller will testify to the House Judiciary Committee it all lies on the shoulders of Chairman Jerry Nadler to decide. However, Rep. Jim Jordan already knows what he wants to ask Mueller if given the opportunity.

On Sunday, Jordan sat down with ABC’s George Stephanopoulos to discuss the latest happenings revolving around the Justice Department, primarily with Attorney General William Barr’s investigation and the speech given by Robert Mueller on Wednesday.

Mueller made clear that he was not interested in testifying to Congress about his report and said that if it happened, he would provide answers that fall in line with his 400+ page report.

When asked if he thinks Mueller should testify, Jordan said, “That’s up to Jerry Nadler. I know this, I’ve got questions for him.”

“I think the one question most Americans want to know: When did you first learn there was…no collusion?” Stephanopoulos corrected Jordan and said Mueller was actually looking into whether or not conspiracy occurred and not collusion.

Jordan went on to cite how Comey and the FBI already knew for months there was no collusion, conspiracy or coordination between Trump’s campaign and Russia leading up to Mueller’s appointment. Jordan speculates Mueller also knew this early on in his investigation.

So as a follow up question, Jordan said he’d like to ask, “If you learned this early on, why did you wait two years before you told the country that there was no conspiracy between the Trump campaign and Russia to influence the election? Afterall, that was your central focus, your central task of this entire special counsel investigation.” Video Below

Comey told Congress that after 10 months of investigating (July 2016 to May 2017,) the FBI had no evidence of collusion.

The question the country has for Bob Mueller: When did he learn that there was no collusion? And once he learned it, why didn't he tell the American people? pic.twitter.com/Y5qtePsxbw