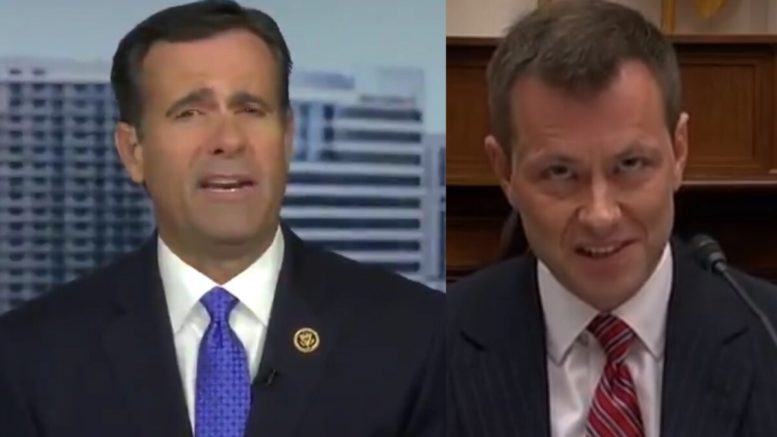 Congressman John Ratcliffe (R-TX), joined host Maria Bartiromo on Fox News’ “Sunday Morning Futures” where he weighed in on Robert Mueller’s press conference, the Attorney General looking into the origins of “spying”, and former Obama officials who are now in possible hot water.

He further revealed who led “Operation Crossfire Hurricane”, the counter-intelligence investigation that related to the Trump probe.

Attorney General William Barr was asked during an interview on CBS Thursday what he thought about Robert Mueller’s press briefing, specifically the part where he said that he couldn’t make a decision about whether the President committed obstruction.

Asked if he agreed with Mueller’s interpretation of the matter, Barr replied, “I personally felt he could’ve reached a decision,” adding that Mueller had his reasons for doing it and that he was not going to “argue” about the reasons Mueller provided on why he didn’t make a decision.

Rep. Ratcliffe said that he “disagreed” with the Attorney Generals statement, noting that Mueller “could have” reached a decision. “Bob Mueller ‘should have’ reached a decision. There isn’t anyone in the country, Republican or Democrat, who expected Bob Mueller, after two years, to come back and tell us that he ‘wasn’t able’ to reach a decision or a conclusion, especially when he was able to reach a decision on the most important aspect– whether or not anyone committed a crime by colluding with Russia,” he said.

“Bob Mueller put a stake in the heart of this collusion conspiracy narrative as it related to Donald Trump. He did exactly what a prosecutor isn’t supposed to do, which is talk about potential crimes, potential conduct of someone that he has no intention of charging with anything. It doesn’t make any sense,” Ratcliffe added. (Continued Below)

He noted that the OLC opinion that Robert Mueller used as the basis is “absurd,” and Ratcliffe compared it to a quote from the movie “Billy Madison”.

“I wish that I could tell you that I agreed with his analysis. The idea and the explanation that he gave of that OLC opinion– stands for the proposition that you can investigate a sitting president, but not reach a decision or conclusion about whether criminal activity occurred, is just absurd,” Ratcliffe said.

“I wish I could tell you it conjures up James Madison, but all [that] I can think about is Billy Madison. The part of the movie where they say, ‘Everyone in the room is now dumber for now listening to that explanation,’ because it makes no sense at all,” he expressed. (Continued Below)

“That letter documents some really important and extraordinary events that were happening in August 2016. It was on July 31, 2016, that the FBI opened this counter-intelligence investigation that related to the Trump campaign, ‘Operation Crossfire Hurricane,‘” he said.

“It’s interesting that 18 days later on August 17, 2016, that the FBI and CIA conducting a counter-intelligence briefing for the purpose of protecting and warning Donald Trump, would be put in charge of coordinating that briefing, Peter Strzok, the same agent who was already investigating the Trump campaign. The same agent, who 8 days before that defensive briefing to protect and warn Donald Trump, sent a text message saying he was going to ‘stop him.’ And, who two days before that defensive briefing, sent a text message saying, ‘we need an insurance policy against a Trump presidency,'” he noted.

Ratcliffe explained that on August 17, 2016, Trump was not warned about Russia interference in his campaign, nor was he briefed about the Steele dossier, or Carter Page. (Video Below)

The Texas Congressman said that the problem with “not warning or telling Donald Trump” is that they “were” warning his political adversaries. “On August 25, 2016, CIA Director John Brennan picked up the phone and called Democratic Minority Leader, Harry Reid, and briefed him on ‘Russian interference’ into the Trump campaign about the Steele dossier and about Carter Page,” Ratcliffe revealed.

“This is why Bill Barr is saying ‘this stuff doesn’t add up’ about the origins of this investigation and why he says it doesn’t jive and we need to get to the bottom of it,” he added.

Ratcliffe concluded that the only reason Democrats are able to talk about obstruction of justice as a possible basis for “impeachment” is that former Obama officials that started the obstruction investigation, such as Jim Comey, Peter Strzok, and Andrew McCabe, “didn’t do their damn job and warn Donald Trump. Had they warned Donald Trump, there wouldn’t have been a Bob Mueller,” he stated.