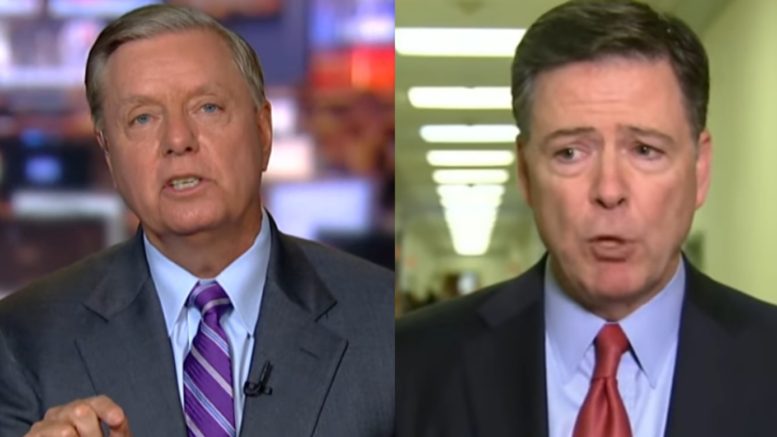 Over the weekend, former disgraced FBI Director James Comey upped the ante on his attacks directed at Attorney General Barr.

Comey accused the AG of “echoing conspiracy theories” over Barr’s committment to investigate the origins of the Russia probe and potentially re-look at the handling of Hillary Clinton’s email investigation.

On Monday, Senator Graham joined Sean Hannity, where he gave his reaction to Comey’s latest smear of Barr.

Graham began by giving a brief history of the FISA process, where Comey initially told President Trump about the dossier that he claimed was unverified, yet using that same document as the key component to obtain a FISA warrant to spy on President Trump’s campaign.

Graham said, “Those two things don’t add up. That’s not a conspiracy theory. Those are facts that need to be reconciled.” Video Below

Graham turned his attention to the Hillary email investigation, which he said the decision not to prosecute Clinton for obstruction of justice was most likely “politically motivated.”

He said, “Taking a a hammer to two phones being asked for, for evidence, cleaning a server, bleaching it out so you can’t get the emails is classic obstruction of justice.”

“Compromising classified information–she clearly did that,” Graham continued. “The decision not to prosecute her was pretty simple, in my view. If you want her to win, you can’t prosecute her.” Video Below