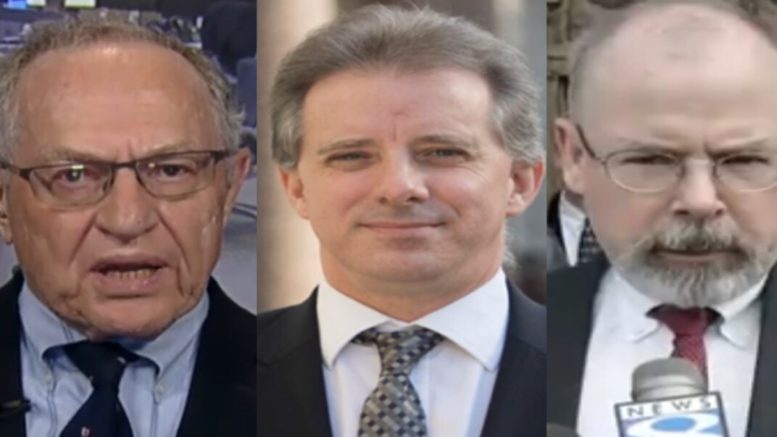 Harvard Law school Professor Emeritus, Alan Dershowitz, joined host Sean Hannity on Fox News Wednesday where he weighed in on Former British spy Christopher Steele, the author of the anti-Trump dossier, and provided what key questions John Durham’s team should ask of him.

This comes as the former MI6 agent agreed to be questioned by U.S. investigators.

Christopher Steele compiled the anti-Trump dossier for “opposition research” for the firm Fusion GPS, which was bought and paid for by Hillary Clinton and the DNC in 2016.

The Times of London cited sources close to Steele in reporting he will be interviewed by American investigators in London within weeks, reported Fox News.

“I’m glad that he is testifying or at least appearing in front of the Justice Department. I think the questions that they will put to him in order to try to protect the investigation will be based on chronology. When did you realize that the report wasn’t as valid and solid as you originally thought it was? When did you learn that it was paid for by Democrats?” Dershowitz asked. “And that wasn’t disclosed…”

“What [Steele] said up until now is ‘the report itself is not valid’,” Dershowitz said. “But what we need to know is, ‘when they knew it’ and ‘what they did about it’.” (Continued Below)

“And, did anybody misrepresent what they knew at any particular time to the FISA court?” Dershowitz asked.

(Related: DiGenova Reacts To Steele Meeting With Investigators: ‘The Walls Are Beginning To Close In On The FBI Fraudsters’)

“Raw intelligence should never be the basis for a FISA warrant that intrudes on the rights of American citizens privacy. We need to have more than that, and we need to have complete candor from anybody that signs the FISA warrant. They have to tell the court, ‘look, we have this, we’re not sure how valid it is. The author is not positive,'” Dershowitz stated. (Video Below)

Dershowitz noted that there was something in the “footnote” of the FISA application, but that they “clearly intended to mislead the court into thinking that they had a credible source that was enough to justify intruding on the privacy of an American citizen.”