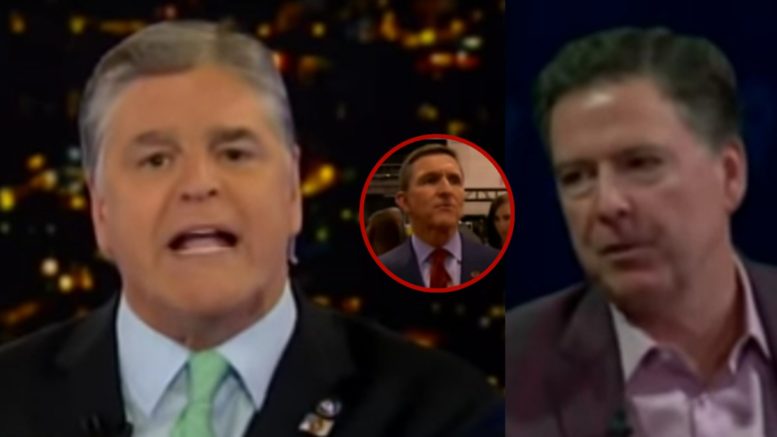 Sean Hannity took a moment to slam James Comey & company on Thursday as General Michael Flynn has been making headlines for making a move to fire his legal team.

It appears that Flynn could be on the verge of pulling his guilty plea in wake of his sentencing that came as a result of, what Hannity calls, “a pergury trap” that was laid  by Comey, McCabe and Mueller.

Back in December of 2018, Comey bragged about setting General Flynn up, where he said that he sent the FBI agents to the White House. He also admitted that he normally wouldn’t have done so or gotten away with it with previous administrations.

Knowing that Trump’s Administration was not yet fully organized to know how to handle FBI agents wanting to question Flynn, Comey said he thought at the time, “It’s early enough. Let’s just send a couple guys over.”

Hannity reacted to the clip of making such remarks. He said, “So you tell him not to get a lawyer, then you set him up, then you brag about setting him up. What a jackass!”

“Who treats a 33-year veteran like this,” Hannity continued. “That’s how we treat American heroes? We set ’em up? We tell them not to have lawyers? We pretty much say it’s not an investigation and brag about it?” Video Below