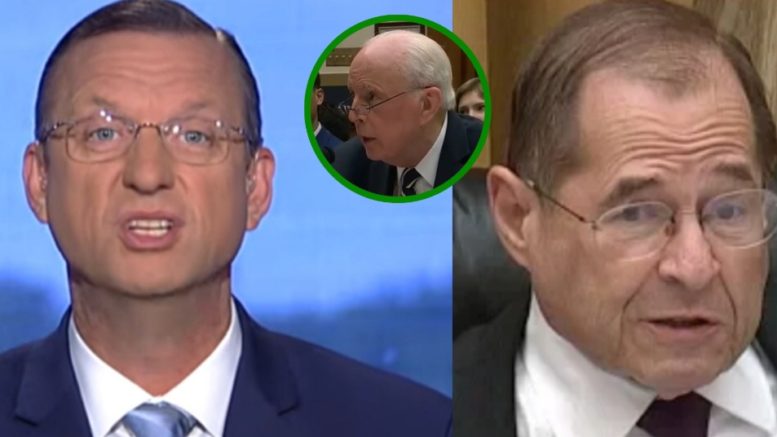 Congressman Collins believes nothing was accomplished during Rep. Nadler’s circus show in what seems to be his attempt to “get President Trump.”

“It was about like watching late night reruns on the cable channels where you see all the shows and you know what they’re going to say– you laugh at all the jokes before they ever get there,” Collins began.

The Georgia Congressman explained the problem with Dean is that he is trying to recreate his 45-year career by saying that he was “part of a corrupt organization” and claim that after testifying “everything is worse” than what he did. “That’s how [Dean] made a living for 45 years,” Collins added.

Asked what Dean was doing as a witness after he admitted that he was not a “fact witness”, Collins said, “That’s a good question for my Chairman and the rest of the Democrats. Why are you bringing in someone, except for star value? Let’s be very honest: what they wanted there was the word ‘Nixon and impeachment’ because they were trying to tie that word to the President. They cannot find any other way to tie this President to anything else except through innuendo and off candid remarks.”

“They want the word ‘impeachment’ there so it lets their base think that they’re actually doing something when in reality, they’re just simply rehashing old times,” he added. (Continued Below)

On Monday, House Democrats reached an agreement Monday with the Justice Department to view underlying documents behind the redacted report by Robert Mueller. Collins responded, “I think the Democrats on the committee are desperate to find an answer. They promised their base impeachment. They promised their base that the Mueller report would take this President down.”

(Related: Collins BLASTS John Dean To Kick Off The Hearing: ‘[Dems] Have The ‘Godfather’ Here Today’)

“What we’re finding out is that they’re going to take little bits and pieces and say, ‘Well, what about this?’ But, my question to our committee is: the Mueller report had unlimited resources, many investigators, grand jury, subpoena options, everything that we don’t have. How is our committee who can’t even seem to get through a hearing yesterday without it looking like a total joke? How are they going to actually investigate better than a Mueller who is fully funded and was after a specific reason? They’re just trying to tar this President,” Collins explained. (Continued Below)

The House Judiciary ranking member also commented on what the Attorney General and John Durham are doing– looking into the origins of how everything started.

“If I was in the position the Democrats are in with the promises they were made as they were going out there saying ‘there’s collusion in plain sight’, I’d be doing everything I could do to desperately rehabilitate my story, because when the origins come out, as I said yesterday, the corrupt cabal of [Peter] Strzok, [Lisa] Page, [James] Comey, [Andrew] McCabe, and all them… John Dean is the ‘Godfather’ of using governmental resources to spy on campaigns. And what we’re finding out now is this was nothing more than a coordinated effort by the Obama administration Department of Justice to go after a candidate they didn’t like,” he said.

He added that Democrats know the ball is about to drop and “they’re going to have to do explaining to the American people on why they’ve tried to take down this President while at the same time realizing and not wanting to look at what actually was there.”

Collins concluded by noting that Mueller said there was interference in the elections. “Has my Chairman scheduled any hearings on trying to fix that? Have they tried to actually schedule a hearing on trying to find out exactly what Mueller did find in the affirmative? No, because all they want to do is go after the President to satisfy a rabid base.” (Video Below)