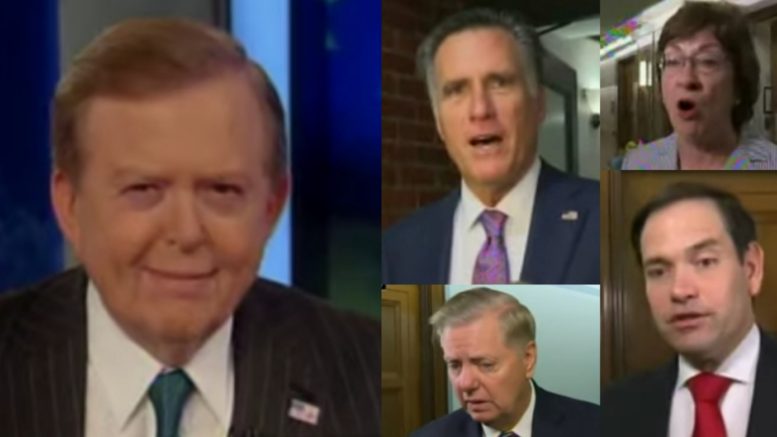 On Thursday, Lou Dobbs reacted to those on both sides of the aisle who made strong statements against President Trump after he suggested that he may not tell the FBI if foreigners offered opposition research on a 2020 rival.

Although the statement was hypothetical and likely taken out of context, it was expected that the left would pounce on Trump’s remarks as a chance to attack him.

However, Dobbs was troubled by those on the right, primarily GOP Senators, who spoke out against the President. And he let them have it.

Dobbs initially slammed the “ridiculous, absurd, hypocritical” forces on the left for their attacks on the President over his remarks, especially since they had absolutely no problem with the Clinton/DNC-funded dossier that was authored by former British agent Christopher Steele.

He then turned his attention to “the RINOS,” and claimed their actions are what is “really dirty about this whole story.” Video Below

Dobbs played clips of Senators giving their reactions to Trump, but he focused primarily on Mitt Romney who said, “It would strike at the very heart of our democracy.”

Dobbs mocked Romney’s statement and then claimed that it is Mitt who “spends a lot of time striking at our democracy and more organs than just the heart of it.”

He concluded, “Mitt Romney, what a pious tool.” Video Below