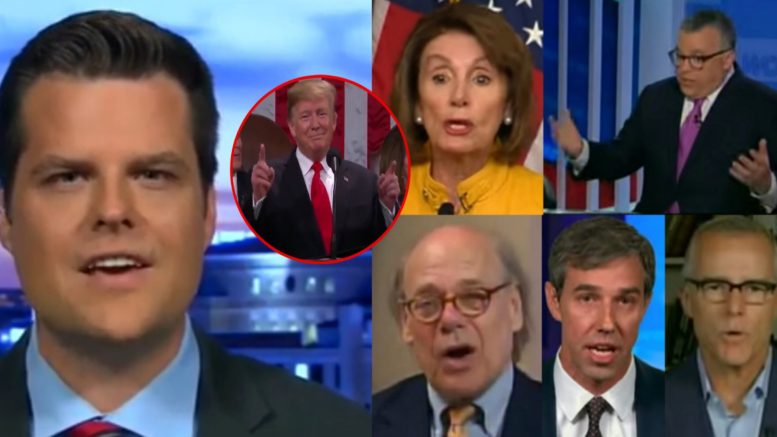 On Thursday, George Stephanopoulos set up President Trump with a crooked question during an interview that stirred outrage from the left and congressional Democrats about accepting “foreign intelligence” or “dirt” against his opposition for 2020.

Congressman Matt Gaetz responded to the Democrat’s selective outrage during a segment on Fox News with Sean Hannity and suggested that Trump was “triggering the media” with the foreign opposition research comments.

Asked whether Trump’s campaign would accept damaging information against his 2020 rivals during the upcoming presidential race from foreigners — such as China or Russia — or hand it over the FBI, President Trump said, “I think maybe you do both.”

“I think you might want to listen, there isn’t anything wrong with listening,” President Trump said on Thursday. “If somebody called from a country, Norway, [and said] ‘we have information on your opponent’ — oh, I think I’d want to hear it.”

Rep. Gaetz mocked the outrage by the left and said, “The hypocrisy is so thick that we can cut it with a knife.”

He clarified by pointing out the dossier that was used to destroy Trump: “You look at the media– David Corn and Michael Isikoff were literally inviting foreign influence into our election by proliferating lies that were funded by the DNC and then told by Russians to destabilize Donald Trump’s candidacy and then ultimately his candidacy,” Gaetz said. (Continued Below)

“And of course, you have the Hillary Clinton campaign and the DNC who was actively working with the Russians. It’s always hypocrisy,” Gaetz added.

Then, Gaetz revealed Trump’s chess move behind his “foreign opposition” remarks, “Trump was triggering the media here, because the more they talk about foreign influence, the more they look ridiculous. The only candidate that we’re certain engaged in no criminal conspiracy with a foreign power is Donald J. Trump, our President. Let’s put that same scrutiny on Hillary Clinton and the DNC and their allies in the fake news media.” (Video Below)

(Related: Levin Lashes Out At Pelosi For Accusing Trump Of Being A Criminal: ‘Nancy Pelosi Is Fascistic’)