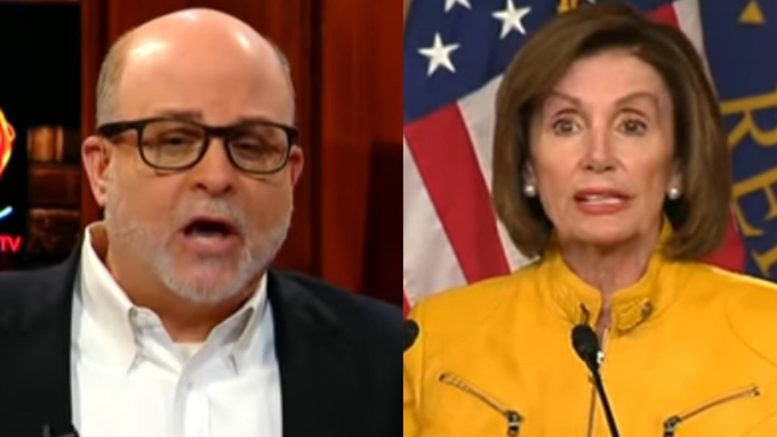 On Thursday, George Stephanopoulos set up President Trump with a crooked question during an interview that stirred outrage from the left and congressional Democrats about accepting “foreign intelligence” or “dirt” against his opposition for 2020.

On Friday, during an interview on “Fox and Friends,” Mark Levin pulled the brakes on “all things Trump” and blasted Speaker Nancy Pelosi and her fellow Democrats for their own political purposes.

Pelosi claimed that the President’s comments during his Thursday interview were unethical, doesn’t know “right from wrong”, and that Trump’s been involved in a “criminal coverup.”

Levin shot back when asked about Trump’s comments: “Let’s talk about Nancy Pelosi for once in our lives here, that she’s never confronted. Nancy Pelosi just said the President of the United States is guilty of a criminal coverup. That’s what they do in fascistic regimes– where a Speaker of the House stands up and accuses people of crimes.”

“If we didn’t have a constitution– and these Democrats that run these committees were in charge, it would be like the French committees during the French Revolution–where they’d be declaring people guilty of the guillotine right next to them and lopping their heads off,” he continued.

Levin pointed out that “there is a time when Congress is out of control” adding that this is one of them. “We’ve seen this throughout our history. These subpoenas are outrageous, they’re intended to destroy people, they are unconstitutional. Everybody that receives these unconstitutional subpoenas should be fighting them. They are victims.” (Continued Below)

He went on to say that he didn’t mind talking about the President but noted “it’s all things Trump” and urged, “Let’s put the brakes on it.”

He said that Democrats have “taken over the House of Representatives” for “their own political purposes.” (Continued Below)

Levin also said that Democrats are “liars and hypocrites” and that Hillary Clinton and the DNC themselves paid for opposition research.

He wondered why Stephanopolous doesn’t sit down with Pelosi and say: “Hillary Clinton and her campaign and the DNC laundered money in order to buy false information from the Russians to use against the President of the United States, which was used by the Obama administration at the top levels of the FBI and the intelligence committees in the FISA court system. Tell me, Nancy Pelosi, do you agree with that?”

“That’s a fact! It’s not a hypothetical. The President of the United States has never taken information from foreign governments. He’s never used opposition research. So for the past two days, we’re dealing with a pseudo-event. It’s not news, it never happened. Just because Democrat- Clintonoid George Stephanopolous sets the President up with a question like that, now we’re gonna discuss it all week,” Levin said. (Video Below)