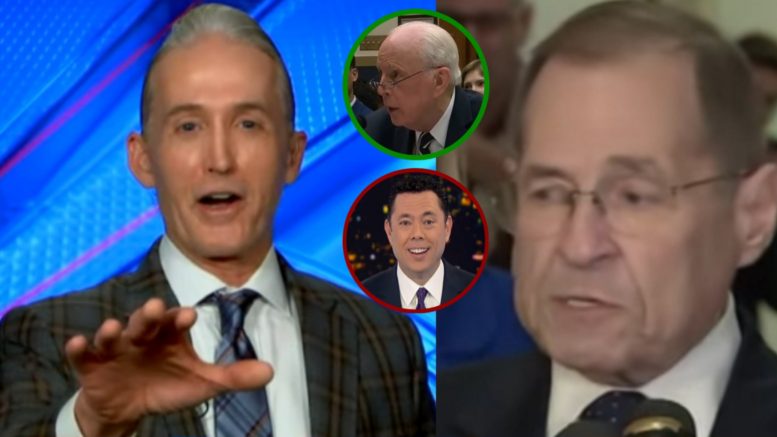 On Friday, Trey Gowdy slammed House Democrats over their committee hearings and the way the media is going about covering them.

Gowdy used John Dean’s latest hearing as an example of just how “pathetic” and “sad” Democrats have become in their opposition to President Trump.

In regards to Dean, Gowdy said, “He’s not a fact witness. So it begs the question to Jerry Nadler: Why would you call someone who can’t help the American people know the facts or the law?”

“And the reality is,” Gowdy continued, “this story, they wanted to get it started right after the inauguration and they want to keep it going until November of 2020. And even having pathetic, sad hearings that don’t benefit anyone other than the folks who buy ads on television.”

Gowdy went on to blast the “duplicity” and “relativism” that Republicans face with the media compared to Democrats. Video Below

He said Republicans would have been “excoriated” if they ever called a convicted felon, such as Dean, as a witness at a public hearing.

He then concluded, “Folks in the media are not trusted as much as we need them to be in a robust, thriving democracy. And at some point they need to ask themselves: ‘I wonder why we’re not trusted? I wonder why people think that we are in the tank for the Democrats?’ And I think you see a little bit of that this week. Video Below