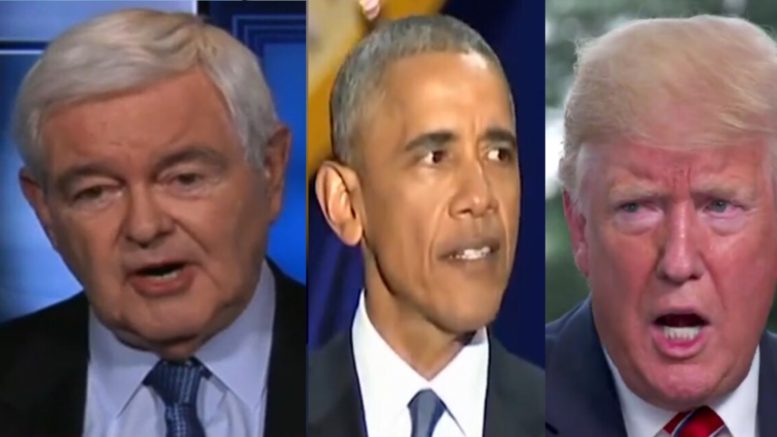 During an interview with ABC’s George Stephanopoulos, President Trump said that former President Barrack Obama “certainly must have known” about the Russia probe because it went “very high up in the chain”.

Former House Speaker Newt Gingrich said on Monday during an interview on “Fox and Friends” that it’s ‘virtually impossible’ that the Obama administration didn’t know about the Trump-Russia investigation.

Newt Gingrich believes that the big picture of the Russia probe is “close to insane.”

“You want to suggest to me that the Attorney General has a private meeting with former President Clinton on an airplane in Phoenix, for I think 45 minutes, and the current sitting President, Barack Obama, doesn’t know about it?” Gingrich asked.

“Just take the press coverage,” he continued. “You think he woke up in the morning, looked at The New York Times, looked at The Washington Post and he didn’t call over and say, ‘Gee Loretta… what were you doing having a secret meeting with the former President of the United States, the week that the FBI is gonna interview his wife on potential felony charges.”

Gingrich said that Obama is a “really smart guy” and suggested that he is a “control freak.” He pointed out that the FBI got a FISA warrant. “And nobody thought to mention to the incumbent President? You think that his national security advisor asked to unmask the largest number of Americans ever requested… and the President of the United States is sitting down the hall didn’t know about it?” Gingrich wondered. (Continued Below)

The former House Speaker noted that only in Washington D.C. could the media put up walls and pretend that Barrack Obama must have been innocent along with Joe Biden.

“Obama’s really, really smart. And I think it’s very unlikely, virtually impossible, that all this stuff went on and he wasn’t in some way informed,” Gingrich explained.

He added that smart people thought they could keep secrets but believes it will all come out over time. “Hillary deleting 30k emails, and Bill Clinton getting a half million from a Russian bank, and another Russian group giving the Clinton Foundation a huge amount of money, while Hillary was helping deliver Uranium contracts to the Russians, none of that, of course, really counts, because after all, we know as good liberals, their hearts are pure.” (Continued Below)

Gingrich went on to say that “If you’re President Trump and you’re sitting there… [you’re] going ‘Gimme a break!’ Of course, Obama knew about it. [Do] you think Loretta Lynch didn’t know about it? She’s sitting there, she’s the Attorney General. How could she not have known a lot of this stuff?” He asked.

He pointed out that “everyone was terribly shocked” when President Trump indicated he “might or might not” be involved in reporting to the FBI about a foreign government trying to “give him something.”

(Related: Trump Clarifies His ‘Foreign Oppo’ Remarks, SLAMS Dems Reaction To It: ‘How Can You Report Something That You Don’t Know?’)

“Nobody then turned and said, ‘well if foreigners aren’t supposed to be involved in the American campaign, how come the Clinton campaign was helping fund the Steele dossier being written by a former British secret agent?'” He asked.

“Now somehow it’s okay if you’re a liberal and you hire foreigners to do research for opposition research. But we’re all gonna be terribly shocked if Donald Trump tells the truth. I think that’s why his base likes him, he cuts through the baloney. Let’s be honest about this stuff: only the elites, who always absolve themselves of anything because their heart is pure, would believe this malarky,” Gingrich concluded. (Video Below)