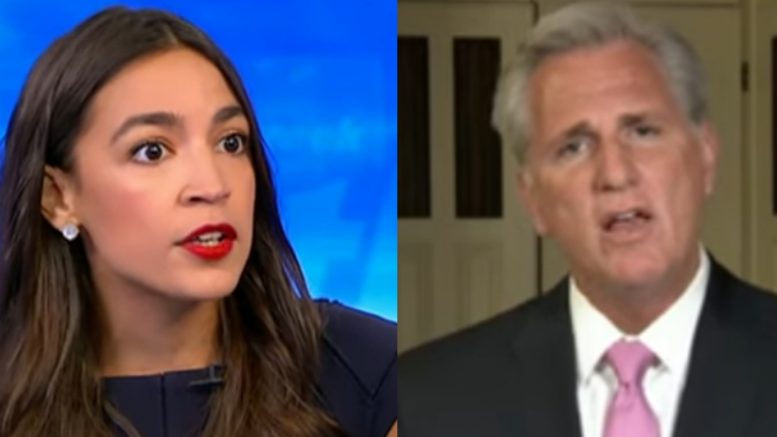 Alexandria Ocasio-Cortez has been met with intense backlash after she referred to places where overflow of illegal immigrants are kept as “concentration camps.”

As a result, Rep. Kevin McCarthy believes she has no choice but to apologize to America for making such a statement.

Cortez tried to fan away heat from her remarks with a follow-up tweet that said, “And for the shrieking Republicans who don’t know the difference: concentration camps are not the same as death camps.”

She added, “Concentration camps are considered by experts as ‘the mass detention of civilians without trial.’ And that’s exactly what this administration is doing.”

Related Article: AOC Accuses Fox Of Making Border Look Worse Than It Is, ICE Director Swipes Back: ‘Do Your Homework’

When asked what he thought of AOC’s remarks, McCarthy said, “Well, I think she needs to understand what history is and not compare them both.” Video Below

“The other thing she needs to understand is what is happening on the border–has she been there to see it? These are people who are illegally crossing,” McCarthy continued.

He added, “This is a country that is actually caring for them–providing their healthcare, taking care of the children. And the majority of children who are coming over are not with their parents.”

“So, it’s fundamentally different, and she’s trying to use something without using history, and I would never compare the two. She actually owes the country an apology,” McCarthy concluded. Video Below