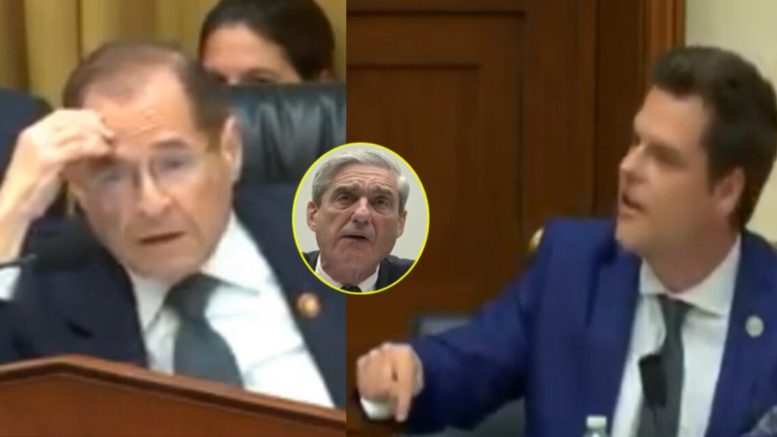 Congressman Matt Gaetz (R-FL) slammed Chairman Nadler (D-NY) and the Democrats’ farce hearing after witnesses revealed they had no personal knowledge of the truth or falsity of any material fact in the Mueller report.

Rep. Matt Gaetz began his opening by directly confronting Chairman Nadler to see if he is going to “subpoena” Robert Mueller.

Gaetz asked, “Mr. Chairman are you going to subpoena Robert Mueller? I’ll yield to you to answer.”

Nadler responded and said that he was “not going to answer that at this time.”

The Florida Congressman next asked the witnesses to raise their hand if they had any knowledge regarding “the truth or falsity of a single material fact of the Mueller report”, to which none raised their hand.

Then, he called out Nadler for not using his subpoena power to have Mueller testify. “You won’t subpoena the person who wrote the report, and so, this hearing should not be entitled ‘Lessons From the Mueller Report’, it should be entitled ‘Hot Takes From the Mueller Report’, because what we’re getting are people who have no knowledge of the facts, no information as to the underlining information. They’re just reading it and offering their analysis and their hot takes,” he continued. (Continued Below)

Gaetz believes there are far more critical issues to address and named the crisis on the U.S. southern border. He pointed out that one of the witnesses “is sort of an expert on this subject.”

The Florida Congressman asked one the witnesses about the Mexican cartel but Rep. Hank Johnson became unhinged and interrupted Gatez. “Mr. Chairman, at this time I’m gonna interrupt and say that this hearing is about Part 1 of the Mueller investigation….” Johnson whined.

Gaetz fired back and declared, “I wish it was about the Mueller report!”

Nadler suspended Johnson’s request and allowed Gaetz to continue asking a question about the Mexican cartels and the southern border, but then changed his mind asserting that it has nothing to do with the Mueller report. He then allowed the witness to answer Gaetz’s question until an argument broke out.

Gaetz ripped Nadler for cutting off his time when he was trying to prove a point to the witness who knew nothing about the Mueller report and insisted that there are more important issues that could be discussed, instead of wasting time rehashing the conclusions of the Mueller report. (Video Below)

“Mr. Chairman, you guys take way more than your allocated time. Then, you take my time and impose on it, then restrict it. This is a total farce, and it’s no wonder witnesses don’t want to come here and testify to this committee,” Gaetz concluded.

.@RepMattGaetz asks @RepJerryNadler if he's going to subpoena Robert Mueller.
Nadler: "I'm not going to answer that at this time."