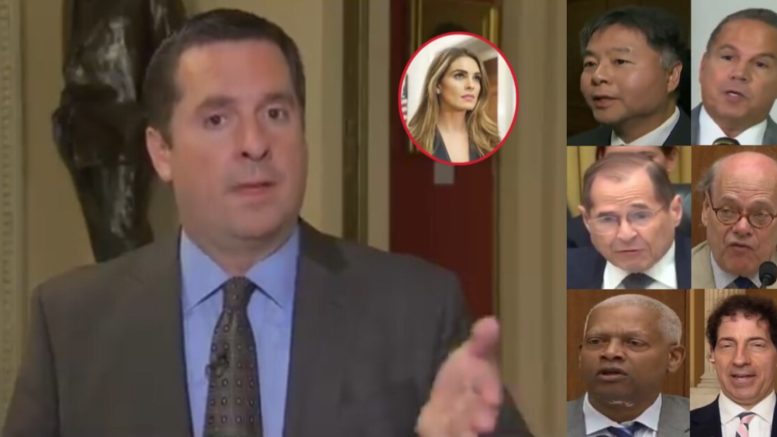 Former White House communications director Hope Hicks testified before the House Judiciary Committee in a closed-door congressional hearing Wednesday about her time in the Trump administration.

On Thursday, however, Congressman Devin Nunes (R-CA) blasted Democratic congressmen during an interview on Fox News after they asked Hicks about her “love life” during the testimony on Capitol Hill.

“Nobody quite understood why she was back in the U.S. Capitol yesterday doing essentially another deposition,” Nunes began.

“My sources that were inside and did the interviewing said it was quite embarrassing to watch the Democratic congressmen essentially ask Hope Hicks about her love life,” he said.

“I think that’s very bizarre to have a bunch of old, pervy congressmen asking somebody who has no new information about her love life,” Nunes added. “I think the American people would be ashamed if they knew what actually happened in that room.”

Asked what’s relevant about her “love life”, Nunes responded, “I have no idea, that’s a good question. (Continued Below)

Hicks was questioned for several hours about her work for President Donald Trump on the campaign, during the presidential transition period and in the White House. She reportedly declined to answer some questions after President Trump asserted executive privilege.

(Related Article: Trump: ‘Why Aren’t Dems Looking At The 33K Emails Hillary Deleted & Acid Washed After Getting A Subpoena From Congress?’)

Meanwhile, President Trump took to Twitter where he blasted Democrats for attempting a “do over” of Mueller’s investigation by bringing in Hicks as a witness in a series of tweets Wednesday. He also accused Democrats of ignoring the “real obstruction” by Hillary Clinton. (Video Below)

….asking Hillary Clinton why she deleted and acid washed her Emails AFTER getting a subpoena from Congress? Anybody else would be in jail for that, yet the Dems refuse to even bring it up. Rigged House Committee