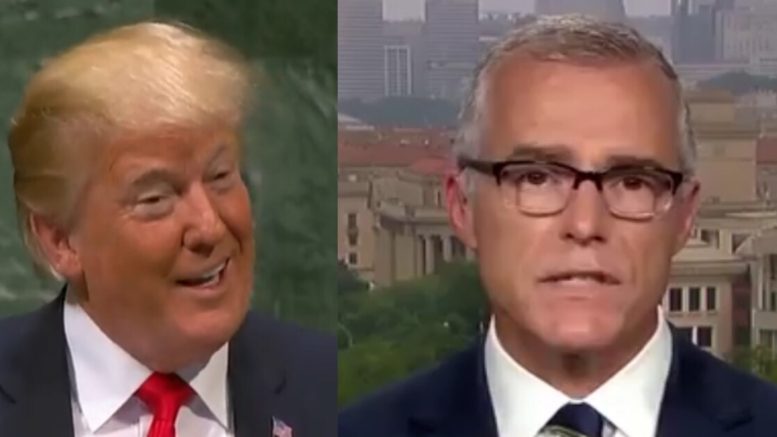 Former FBI Deputy Director Andrew McCabe interviewed with John Berman on CNN Thursday where he suggested that Congress speed up their move to impeach President Trump.

“I think Congress should absolutely move forward with their constitutional obligation to have this information heard. I am not a politician. I’m not a political operative. I wouldn’t dare to predict how that process would affect the election or whether it would result in the President’s removal. I think those are all issues that are far down the road,” Andrew McCabe said.

“The only thing that’s clear to me right now John, is that Congress has an obligation under these circumstances to air out exactly what is known by the government about the President’s conduct, and they should do that by calling witnesses,” he added.

McCabe accused the White House of delaying and obstructing Congress to prevent Trump’s impeachment. “They’re clearly very concerned at public at large hearing a very vivid and compelling way the information that was revealed by the special counsel,” McCabe claimed.

He wondered, “If Congress does not act now, when will they ever?” (Continued Below)

McCabe was fired from the FBI in March 2018, two days before he was eligible to receive a pension and retire. The move came as a result of insurmountable details of corruption uncovered within the highest level of America’s law enforcement. Several documents and reports point to the strong possibility that members of the FBI and DOJ abused their power to carry out a plan to overthrow the President. (Continued Below)

The President tweeted after McCabe was fired, “Andrew McCabe FIRED, a great day for the hard working men and women of the FBI – A great day for Democracy. Sanctimonious James Comey was his boss and made McCabe look like a choirboy. He knew all about the lies and corruption going on at the highest levels of the FBI!”

Related: James Woods Digs Deep Inside The FBI Scandal and Exposes The Crooked Core Of It All)