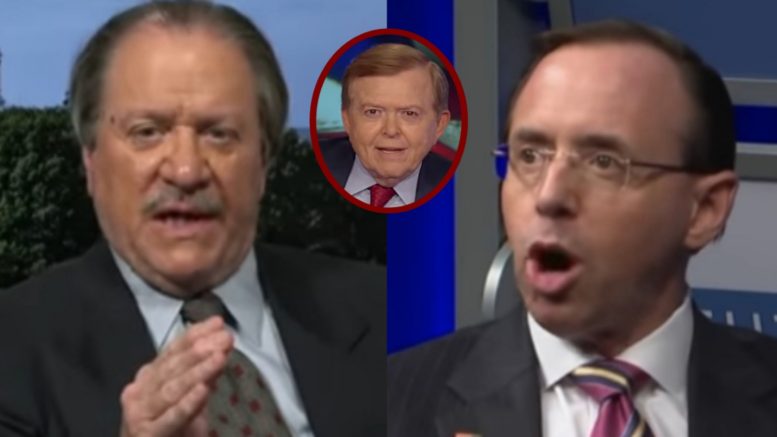 Joe DiGenova had some harsh words for Rod Rosenstein while appearing on Lou Dobbs Tonight.

Dobbs, DiGenova and Victoria Toensing were discussing the discovery of a mysterious memo that was written by Rod Rosenstein in October of 2017. It’s suspected that the memo outlines a “third scope” of Robert Mueller’s investigation.

In conclusion of his new report, investigative journalist Byron York suggested that the existence of a third “scope memo” goes to show that Mueller likely knew all the way back in October of 2017 that there was no evidence of conspiracy between the Trump campaign and Russia. Yet, the probe into President Trump, somehow, was able to carry on.

Toensing summed it up by saying Mueller’s investigation only continued so they could bring forth some kind of indictments for “process crimes” or, and not based on what they were initially hired to investigate.

DiGenova said, “This all points back, inevitably, to the origins of this investigation, with the illegitimate setting up by Rod Rosenstein.”

“When history of this scandal is written, one person will be blamed and should be blamed for the entire wasting of two years of President Trump’s presidency,” he continued. Video Below

Rod Rosenstein was a coward,” diGenova declared. “He didn’t know how to tell McCabe and those people to stop fooling around and messing around with Trump.”

DiGenova continued, “He came in, he found out about the Hillary Clinton investigation, he saw how rabidly anti-Trump they were, and he, Rosenstein, caved, and gave up the power of the Attorney General and the Deputy Attorney General to a bunch of corrupt FBI officials.”

“And that third scope memo is proof that he was scared to death of McCabe,” he concluded. Video Below