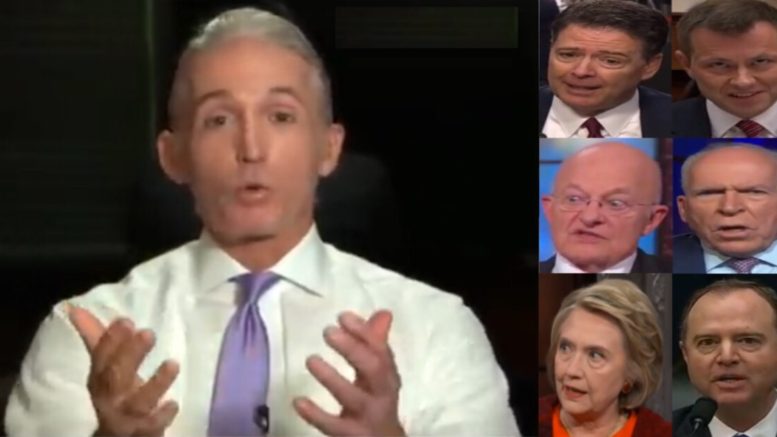 Former South Carolina Republican Congressman, Trey Gowdy, joined Fox News host Maria Bartiromo on “Sunday Morning Futures” where he said “no one is above scrutiny” in the Russia probe investigation.

Gowdy served on the House Intelligence Committee before leaving office in January and has seen exculpatory evidence in transcripts that has the potential to be a “game changer” if it’s ever made public.

The former Congressman said on Sunday that it’s entirely appropriate that Attorney General William Barr is looking into the origins of the Russia probe.

“Some people would tell you that Russia wanted [Hillary Clinton] to lose, and then in a binary choice by default, that means [Trump] must win. The intelligence community’s always really skittish when people look at their work product. They don’t deal in evidence, they don’t deal in evidentiary burdens or thresholds, they deal in assessments. In the past, their assessments were wrong,” Gowdy said.

Gowdy noted he has a lot of respect for the intelligence community, but said, “No one is above oversight and review and scrutiny. And if Barr wants to look at the evidentiary foundations for this counter-intelligence investigation, he should.”

Maria Bartiromo brought up that Michael Morell, former Deputy Director of the CIA during the Obama administration, said, “John Durham’s interest in speaking to the CIA is inappropriate.” (Continued Below)

Gowdy responded to Morell’s criticism and said, “That’s what they always say. Remember the weapons of mass destruction in Iraq? And remember the spontaneous reaction to an anti-Muslim video in Libya. That’s what Morell told us then too. You can’t go interview the analyst, there’ll have a chilling effect. Okay then, quit using intelligence products in your criminal justice analysis. If you don’t wanna supply a criminal justice analysis to your intelligence work, then quit using it.”

Then he noted, “I think what we’re going to find in 2016 is the intelligence community was providing information to law enforcement, that then went into this investigation, where some Democrats are calling for Donald Trump to be in prison. So, you can’t have it both ways. You can’t have a lower standard of scrutiny but still, get your information and put it into the criminal justice realm, it doesn’t work that way.”

Bartiromo pointed out there was information that was not presented to the Foreign Intelligence Surveillance Court (FISC aka FISA) and Congress in relation to notes from Former State Department Deputy Assistant Secretary, Kathleen Kavalec, where she had warned the FBI that Christopher Steele’s information was “not to be trusted.” The FISA court approved four FBI surveillance warrants against Carter Page, a former Trump campaign adviser. The applications cited information from the unverified Steele dossier and also mentioned George Papadopoulos. (Continued Below)

“Here’s one Maria, have you seen the disparate defensive debriefings that they gave candidate Clinton versus candidate Trump? And has anyone asked the FBI to explain why they took entirely different tracks with those two debriefings? There’s a lot left to be seen by you and your viewers, he revealed.