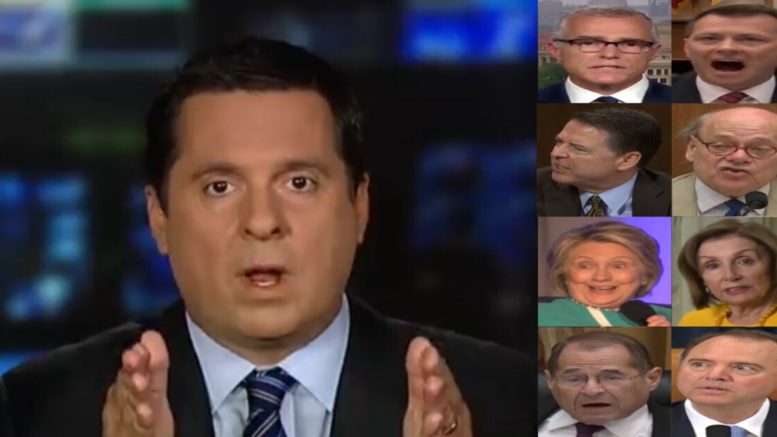 Congressman Devin Nunes (R-CA) joined host Maria Bartiromo on Fox News‘ “Sunday Morning Futures” where he explained details of a new letter he sent to FBI Director Christopher Wray about the origins into the Russia investigation. Nunes wants an answer by Friday.

Rep. Nunes disclosed that he has learned in the last month there was information in the #2 European Affairs Department of the State Department that the FBI withheld from Congress and the FISA court.

“The State Department in 2016– emails went to the FBI saying things like ‘Christopher Steele was not believable, that he wanted to bring this out before the election.’ That should be a big red flag. [They] also said that this so-called Russia hoax operation against Trump, or with Trump, that Trump was a part of, was being run out of the Russian consulate in Miami. Well, it ends up… Guess what? There is no Russian consulate in Miami,” Nunes said.

“This number two person at the State Department named [Kathleen] Kavalec, she informed the FBI of these concerns. Now, why is that important? It’s important for a number of reasons, but first and foremost, the FISA court should have had this. The FBI had it. The FISA court should’ve had it before they went and spied on the Trump campaign by getting a warrant on Carter Page,” Nunes explained.

Last month Swamp Drain reported that Senators Johnson, Grassley and Graham sent letters demanding information about former State Department official Kathleen Kavalec and her notes, which showed the opposition research firm, Fusion GPS, led by Glenn Simpson and Peter Fritsch, were “deeply involved.” Steele and possibly others were keen to see this information come to light before the election. On October 13, 2016, just 3 weeks before the election, Kavalec sent [an] email, but the publicly released version has been redacted, the attachment, the subject, as well as the recipient.

Nunes went on to explain, “Another reason this is important for the FBI is because the Congress, under Republican control last time, asked for anything and everything on Christopher Steele. Clearly, if we would’ve had this [information] 2 1/2 years ago when we started this investigation, we would be in a much different place today, then we are.” [Emphasized] (Continued Below)

“So because this is clearly obstructing a congressional investigation… so someone at the FBI determined to hide this information, not provide it to the court, and what I’m concerned about is: not provided to the U.S. Congress. So, they have till Friday to get it to us, and if they don’t, we will make our 9th criminal referral,” Nunes warned.

Nunes said he won’t know who exactly at the FBI obstructed justice but assured that Attorney John Durham will be able to figure it out. “There [are] emails that went around and somebody decided not to give it to Congress,” he added.

Asked if he thinks the FISA court would’ve reacted differently had they known the information wasn’t credible to obtain a warrant to spy on Carter Page, Nunes responded, “I think all Americans should be furious at this. We now know, on one hand, someone at the FBI kept this from the court. Number two, they also kept this from Congressional investigators, meaning other Republicans who have been investigating this for 2 1/2 years. This is really important information.” (Continued Below)

“I think, a lot of times Americans are just becoming tone deaf to this because it’s just like one grenade after another. It’s like how many times do we have to see this Russia hoax, how bad it was and how really what you see is the only way to define this Maria, is we have people that are possessed in this country. They continue to perpetuate this Russia hoax,” Nunes said.

“The only thing they had on Russians was the Steele dossier and Joseph Mifsud. Those are their Russians. Guess what? They’re fake Russians, they’re phony Russians, they’re Fusion [GPS] Russians, they’re Russians only the Democrats knew about. And the Democrats were the ones colluding with Russians. You just can’t make this up. I don’t know of a better term to use than you have the Democrats in this city, in Washington, D.C., the media, for the most part, 90% of them, are possessed individuals. And the sad part about it is they have a responsibility. They are poisoning, and have been poisoning, the minds of Americans, millions of Americans for 2 1/2 years now. And the worst part is, they’re not stopping,” the California Congressman declared.

Before concluding, Nunes said what he hopes the DOJ will be able to answer, that he hasn’t, is information about two parallel operations that were running at the same time, which he believes started in late 2015, early 2016.

“One is the FBI was running an investigation into the Trump campaign, not in July of 2016 like they said. They’re lying about that, it clearly started in 2015 or early 2016. At the same time, you had the Clinton campaign and the Democratic party running an operation having their ‘back men’, Fusion GPS,– they’re both running an investigation on a parallel track,” he said. (Video Below)

“The thing that we don’t know that we need to get to the bottom of is when did those tracks become one and the same? Were there people working together with the FBI and Fusion GPS and the Clinton campaign? We know at some point they knew about Christopher Steele. My guess is they knew this early on in the process, at least January, February, March of 2016,” Nunes continued.

“So think about that. It’s Banana Republic stuff. It’s stuff that you only see in countries that we would never want to live in where the intelligence organization works with a political party and puts the other campaign under investigation, for the very thing they’re doing,” he concluded.

Watch starting at 5:40 into the video:

(Related: DiGenova Slams Rosenstein For His Role In ‘Setting-up’ Trump: ‘Rod Rosenstein Is A Coward’)