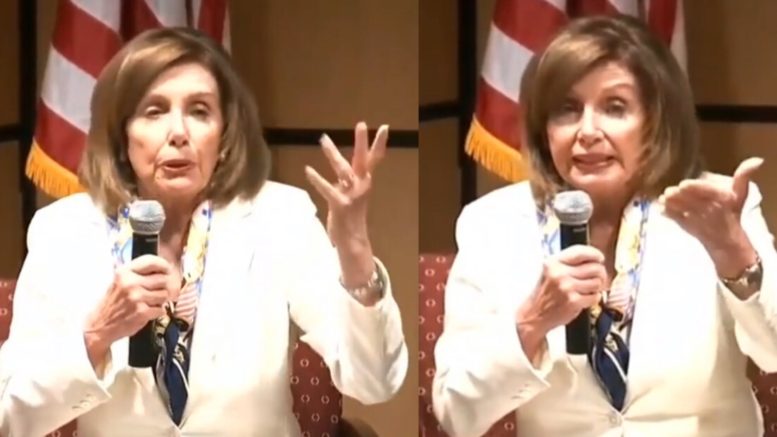 House Speaker Nancy Pelosi, (D-CA) claimed that “a violation of status is not a reason for deportation” while discussing immigration during a “Speaker in the House” discussion in Elmhurst, New York on Monday.

Pelosi has also claimed that border walls are “immoral” at the beginning of the year, further adding she would only give $1 toward the wall.

The House Speaker said she was uncertain of President Trump’s plan to fix America’s immigration system Monday, but declared being in the country illegally was “not grounds for deportation.”

“So, that is really kind of what happened. [Trump] didn’t say what he was going to do but, as the president said, ‘oh, I’ll let you know, I’ll let you know.’ [He] went into — ‘well, people broke the laws.’ A violation of status is not a reason for deportation. That’s just not so,” she said.

Pelosi also commented on the ICE raids, which have been delayed for two weeks as President Trump said he will give Congress additional time to find a solution to the southern border crisis. Nancy called the operation uncivilized and questioned its purpose. (Continued Below)

“When I saw that the President was going to have these raids… I mean it was so appalling; it’s outside the circle of civilized human behavior to just be kicking down doors, splitting up families, and the rest of that, in addition to the injustices that are happening at the border,” Pelosi said.

Then she added, “We have legislation to go forward to address those needs, but in terms of interior enforcement, what is… what’s the point? Well, I won’t even go into what the motivation might be for that here because this is not a political event.” (Video Below)

Pelosi: “A Violation Of Status Is Not A Reason For Deportation”

Pelosi On Immigration Laws: “In Terms Of Interior Enforcement…What’s The Point”

According to Migration Policy Institue, there are an array of “interior enforcement” policies aimed at identifying unauthorized immigrants for removal, including worksite enforcement, employment verification, jail-house screening, and state and local law enforcement activity.

(Related: Laura Ingraham Roasts Nancy Pelosi: ‘The Queen Of San Francisco Has Picked Up Where The Deep State Left Off’