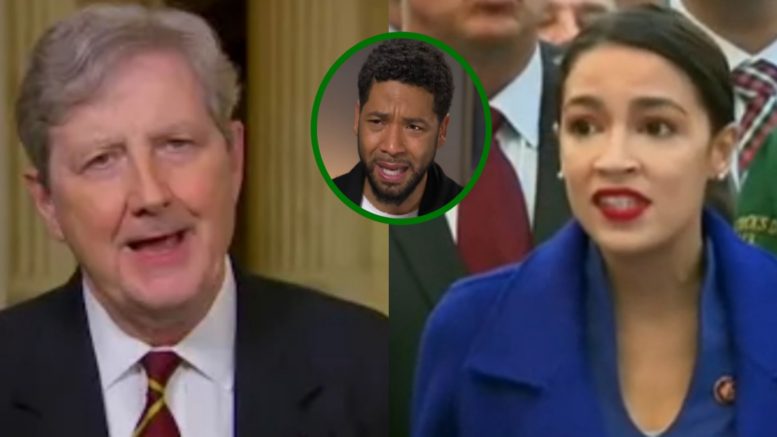 Senator John Kennedy made a special appearance on Martha MacCallum’s program to discuss current political issues, including how to handle the crisis that exists at the US/Mexican border.

During the segment, Kennedy took a moment to blast Alexandria Ocasio-Cortez’s assessment and outrage over U.S. detention centers for illegal immigrants, which she likened to “concentration camps.”

Kennedy said Cortez’s rhetoric is “unhealthy” and is not helping the current situation that exists.

He said, “I understand that she thinks socialism and illegal immigration and abortion are moral goods. But we’ve got a huge problem we’re trying to solve here and the congresswoman has basically demagogued the whole thing.”

“I just about concluded she’s more famous than wise,” Kennedy continued. “And I trust her judgement on this issue about like I trust a Jussie Smollett police report.”

Kennedy them slammed for opposing a bill that would give improve conditions in detention centers with more funding.

Related Article: AOC Tries Turning The Tables On McCarthy & Calls For His Apology, McCarthy Fires Back: ‘You & Other Dems Have Blocked Funding 17 Times’

He declared, “The hypocrisy is breathtaking. On the one hand, she says you’re running a concentration camp and then she refuses to provide the President with the money to enlarge the facilities.” Video Below