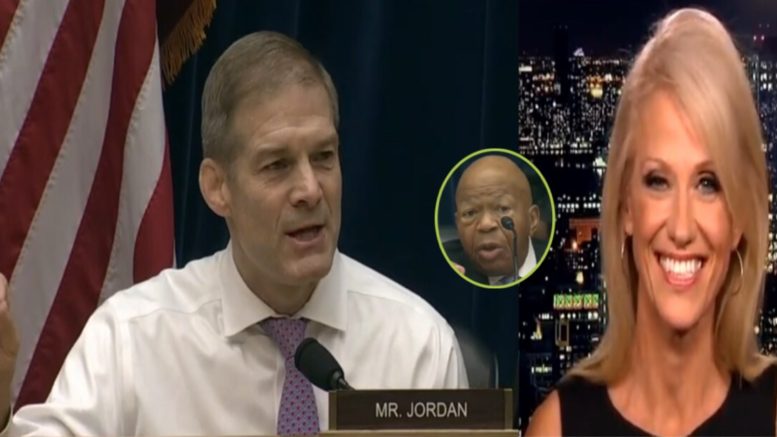 The House Oversight and Reform Committee on Wednesday voted to subpoena White House counselor Kellyanne Conway after she did not appear voluntarily for a hearing focused on her alleged violations of the Hatch Act.

The White House blocked Conway from appearing for public testimony before the committee Wednesday, citing “long-standing precedent” of declining to offer presidential advisers for congressional testimony, reported The Hill.

The committee voted 25-16 to compel Conway’s testimony following arguments over the validity of the Office of Special Counsel’s (OSC) findings that she repeatedly violated the law, which prohibits federal officials from weighing in on elections in their government capacity. Rep. Justin Amash (Mich.) was the lone Republican to side with Democrats to authorize the subpoena, per The Hill.

An angry committee Chairman, Elijah Cummings (D-MD), said in his opening, “There are rarely issues that come before our committee that are so clear-cut, but this is one of them. This is about right and wrong. This is about the core principle of our precious democracy, that nobody, not one person, nobody in this country is above the law.”

He also called the White House’s reasoning for asserting executive privilege “baseless,” noting the committee was not seeking information on private conversations involving the President.

However, the Ranking Member on the committee, Jim Jordan (R-OH), defended Kellyanne Conway in his opening statement and suggested that she is being targeted because she’s good at what she does. (Continued Below)

“Mr. Chairman, the report from the office of the Speical Counsel is outrageous, it’s unprecedented, it’s unfair and it’s just flat out wrong,” Jordan expressed.

“We should be honest, the reason we are here today is because Mr. Kerner got his feelings hurt. He told that to the White House Counsel’s Office. He said he ‘took great offense’ to Ms. Conway’s response and that’s why he rushed the report and only gave [Kellyanne] 16 hours to respond,” Jordan explained.

Henry Kerner, the head of the OSC and author of the report, testified Wednesday that Conway’s conduct “created an unprecedented challenge to OSC’s ability to enforce the Hatch Act,” as per The Hill. (Continued Below)

“Mr. Kerner felt slided. Ms. Conway didn’t pay enough attention to him and his office, and you know why she didn’t? Because the allegations are ridiculous,” Jordan proclaimed.

Then, he noted the previous administration went on cable T.V. for President Obama, “but now that it’s a strong-willed Republican helping President Trump… oh, can’t have that,” Jordan stated.

Jordan explained that Mr. Kerner felt pressured by left-wing political organizations, who filed the complaint, noting that they are the same organizations that raise tons of money by attacking President Trump and his administration.

(Related: Kellyanne Fires Back As House Dems Plan A Vote To Subpoena Her: ‘They Want To Silence Me’)

“Americans hate unfairness, and they know when they see it. They hate double standards,” he said. “The Democrat political group who filed the complaint in the OSC, they don’t like what Ms. Conway’s doing. They don’t like the fact she’s conservative.” (Video Below)

The Ranking Member pointed out that Kellyanne is effective and good at what she does.

(Related: Jordan Reacts After Trump Slams Pelosi For Handing Out Subpeonas ‘Like Cookies’: ‘When Is Someone Going To Jail?’)