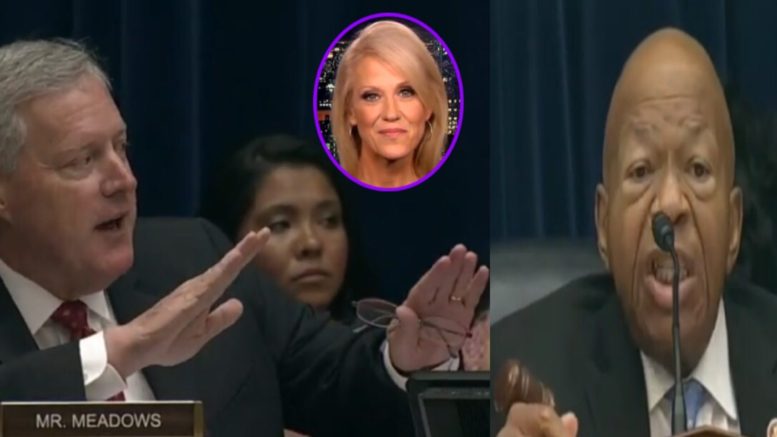 The House Oversight and Reform Committee on Wednesday voted to subpoena White House counselor Kellyanne Conway after she did not appear voluntarily for a hearing focused on her alleged violations of the Hatch Act.

The White House blocked Conway from appearing for public testimony before the committee Wednesday, citing “long-standing precedent” of declining to offer presidential advisers for congressional testimony, reported The Hill.

The committee voted 25-16 to compel Conway’s testimony following arguments over the validity of the Office of Special Counsel’s (OSC) findings that she repeatedly violated the law, which prohibits federal officials from weighing in on elections in their government capacity. Rep. Justin Amash (Mich.) was the lone Republican to side with Democrats to authorize the subpoena, per The Hill.

An angry committee Chairman, Elijah Cummings (D-MD), said in his opening, “There are rarely issues that come before our committee that are so clear-cut, but this is one of them. This is about right and wrong. This is about the core principle of our precious democracy, that nobody, not one person, nobody in this country is above the law.”

He also called the White House’s reasoning for asserting executive privilege “baseless,” noting the committee was not seeking information on private conversations involving the President.

However, Rep. Mark Meadows (R-NC) defended Kellyanne Conway in his opening statement and dropped the mic on Chairman Cummings as they sparred over Conway’s subpoena. (Continued Below)

“Mr. Chairman, this subpoena–one is not necessary, and quite frankly, it’s not following the law. I can tell you what we have here is a political spectacle. We’re talking about keep politics out of government? This subpoena is nothing more than a political spectacle, and we are better than this, Mr. Chairman! We are better than this!” Meadows declared Wednesday.

He held up documents alleging to Kellyanne violating the Hatch Act and continued, “If you look at what the Hatch Act is all about, it’s about protecting federal employees. We’re not doing anything of that here today. In fact, we’re setting a dangerous course where we’re gonna bring in every federal employee that has a Hatch Act violation– when we are gonna go and put a subpoena and put them on trial, right here before Congress?”

“It is wrong, Mr. Chairman!” Meadows exclaimed. “And I can tell you, if you look at what the Hatch Act is all about, it’s not about Kellyanne Conway and her speech, because if we’re gonna have the same standard, let me just tell you there [are] ethical complaints about every single member of Congress that does some kind of T.V. hit here in the Capitol, where they start to talk about it,” Meadows announced. (Continued Below)

Congressman Meadows named of Reps. Eric Swalwell and Adam Schiff who also appear on T.V. and suggested they are violating the rules of the House.

Meadows fired off after being asked to yield and declining, “Here’s what’s troubling Mr. Chairman, as we start to look at this subpoena, we have one standard for Kellyanne Conway and another standard for everyone else. If you’re gonna subpoena people, let’s subpoena Samantha Power!”

“Let’s make sure comes in, because you know what I have? I’ve got emails on her official account where she was going after Donald Trump while she working for our government, and indeed, at the same time was unmasking individuals!” He announced. “If we want to hold people accountable, let’s do it with the same standards because I don’t think it’s right to hold her to a different standard.”

Meadows yielded to Chairman Cummings who angrily expressed, “I think we have gotten to a point ‘sadly’ where disobeying the law is OK!” (Video Below)

The North Carolina Congressman reclaimed his time and fired off declaring that what Conway did was not disobeying the law, but Cummings yelled, “Yes, it is!”

Meadows noted that Conway is not asking for political contributions or campaigning. “She has a microphone stuck in her face and she is responding! You’ve done the same thing, Mr. Chairman. And so, I’d just say, let’s be careful about the standard we’re about to hold,” he concluded.

Watch as Rep. Meadows and Chairman Cummings clash over Kellyanne:

(Related: Before Voting To Subpoena Kellyanne, Rep. Jordan Reveals Why She Is Being Targeted: ‘She’s Good At What She Does’)