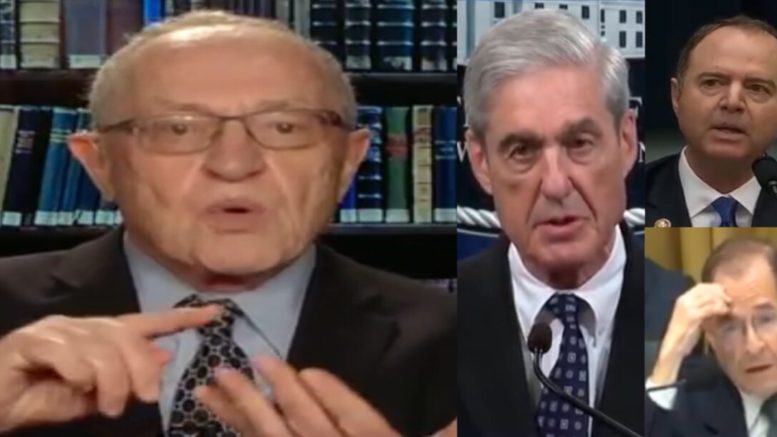 Dershowitz believes Democrats will regret calling Mueller to testify as they have “boxed themselves in.”

Robert Mueller, in his report, conveniently missed the problems with the Steele dossier and those who lied to FISC court judges to obtain a FISA warrant to spy on Trump’s campaign. Further, he conveniently left out of his report those who lied about the salacious material, knowing in advance, that is was unverifiable.

(Related: Nunes Doubles Down, Demands Answers From The FBI In Regards To Steele & Kavalec: ‘This Is Obstructing Our Investigation’)

“The irony is all the questions the Democrats want to ask him he’s not entitled to answer. He can’t answer any questions involving the investigation of President Trump or his campaign, because that was the essence of the report. They decided there was no case for prosecution and Justice Department regulations and traditions say that’s it,” Dershowitz explained.

“You’ve decided not to prosecute, don’t do what it [James] Comey did. Don’t talk about what might have been and don’t say that she was sloppy with her use of the e-mails and don’t say that President Trump might [have] A… B… C… D…, you’ve already said it.,” he continued. (Continued Below)

“He can’t refuse to answer questions about the FISA application,” Dershowitz said because he’s under subpoena, referring to a request by the FBI to surveil a member of the 2016 Trump campaign under the Foreign Intelligence Surveillance Act (FISA). (Continued Below)

“He’s obligated as a lawyer and officer of the court to answer any relevant question because he’s under oath, to tell the truth, the whole truth, and nothing but the truth. I think the Democrats, I’m a Democrat… I hate to see the Democrats shoot themselves in the foot. But, they’ve boxed themselves in. They’re gonna get no answers that help them,” Dershowitz said.

She noted that a large part of the dossier was disinformation planted by the Russians. “So the question I would have is: Mr. Mueller, did you at all look into the other side? Carter asked. Christopher Steele’s contacts, by the way, Christopher Steele was a foreign spy. Did you look into those contacts with the Russians that he had that helped feed the information into this faulty dossier? That’s going to be significantly important.” (Video Below)

(Related: Trey Gowdy Discloses The Questions He Would Ask Mueller If Given The Opportunity)