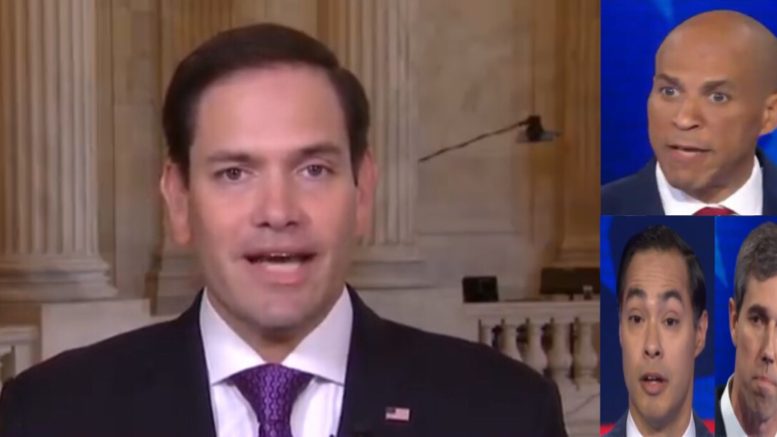 Appearing on Fox News’ “Fox & Friends” Thursday, Senator Marco Rubio (R-FL) was not impressed with what he heard from half of the Democratic presidential hopefuls at Wednesday night’s debate in Miami, Florida.

In what seemed to be a pandering competition to their base, Robert Francis “Beto” O’Rourke, Sen. Cory Booker (D-NJ), and former Obama HUD Secretary Julian Castro took turns speaking in Spanish which became pure gold for meme creators and humorous videos on social media.

Sen. Maro Rubio took issue with Julian Castro, who argued that crossing the border illegally should not be a crime. He also took a swipe at the Democrats who spoke in Spanish during the debate.

(Related: Dean Cain On Cory Booker Speaking Spanish During The Debate: ‘I Thought He Was Speaking French!’)

Rubio was struck by the fact that Latin America, an important issue to many in his state, was barely mentioned during the debate.

“Not a single candidate tried to interject anything about Latin America. Not about Cuba, not about the crisis or terrible tragedy in Venezuela or the horrible things happening in Nicaragua. I think it tells you, honestly, they don’t care or aren’t comfortable talking about those issues. I thought that was enlightening,” he said.

Rubio said a bipartisan bill from the Senate would be signed by President Trump, unlike the House bill passed earlier this week to address the border crisis. He said there are some “radical left-wing” Democrats in both chambers who are blasting the Trump administration over migrant detentions but refusing to support the funding that is needed to improve the situation, per Fox News. (Continued Below)

“It’s an incredibly hypocritical position to take,” he said. “Even the New York Times is writing editorials how that’s an unstainable position for Democrats. My hope is that the leadership in the House will realize they can’t keep caving to these radical left-wing members and finally pass the Bill the Senate has sent over to them, so we can provide at least a humanitarian fund.”

We leave you with this video we found on Twitter:

Dang, they sure know how to score points with their "constituents".#DemocraticDebate #MSNBC #DemDebate #booker #meme pic.twitter.com/eUhFu637uy