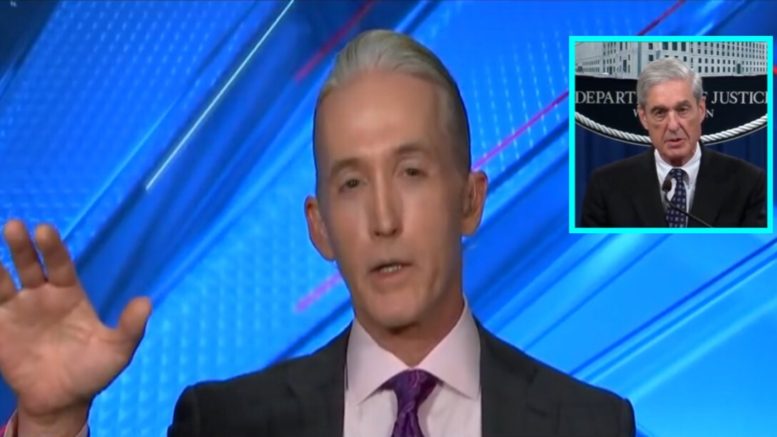 “Number two: someone needs to ask about this legal issue. If you can resist an unlawful arrest, can you resist an unpredicted investigation, which forces Mueller to go to the origins of this Russia investigation and how much time did he spend stifling through that?” He asked.

He went on to say he would ask Mueller next,” What did you find? No collusion, no criminal collusion, despite two years… what did you not find– an indictable offense for obstruction of justice.” (Continued Below)

“And then, this is a category and I would encourage Devin and Jimmy to think about this: what did you not bother to look for?” Gowdy asked proposing to Mueller.

He pointed to the previous administration who unmasked 260 individuals: “You just got through talking about Samantha Power and other people in the American government who may have wanted to influence either an election or an administration. We spent two years focused on whether a foreign country was going to influence or interfere with our elections.”

Devin Nunes explained that he was the one who discovered that the “unmaskings” had occurred. “How on earth did you unmask this many people? It was hundreds and hundreds of unmaskings. What I couldn’t make any sense of is why there [were] so many unmaskings of Trump-transition officials during the transition and time period. There was pieces of that intelligence that [were] leaked. And Mueller should have to answer that too. Did he ever look into all of these leaks?”