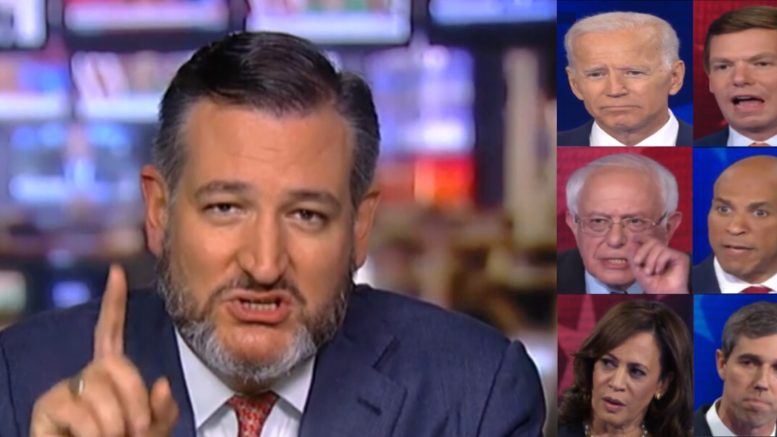 Senator Ted Cruz (R-TX) spoke with host Sean Hannity on Fox News Thursday evening where he weighed in on 2020 Democrat presidential hopefuls amid their debates.

This comes as Democrats offered “few solutions”, except expressing their ongoing hate for President Trump.

The Texas Senator pointed to one debate moment he found particularly unsettling.

“As you know, last month, we apprehended over 144,000 people in the month of May crossing illegally. The Democratic solution is ‘let’s not make it a crime,’ there we go, the problem goes away. That is open borders. It is irresponsible, and it is sadly where the Democratic Party is today,” Sen. Cruz added.

On the second night of the Democratic presidential debate, moderators asked candidates with a show of hands whether they would support decriminalizing the act of illegally crossing the border into the United States. All 10 candidates — Biden, Sanders, Buttigieg, Harris, Gillibrand, Bennet, Swalwell, Hickenlooper, Yang, Williamson — raised their hands in approval. That moment was perhaps the Democratic Party’s most significant step yet toward embracing a policy of open borders. (Continued Below)

President Trump’s 2020 reelection campaign manager, Brad Parscale said on Twitter, “Now Democrats are for OPEN BORDERS! These debates are great, the American people can now see how far left the candidates are. If these policies were implemented millions of foreigners would flood our system and overwhelm public services. They are disconnected from reality!”

Democrats did not stop with opening the border though. On Thursday night, they also supported a policy of offering healthcare to illegal immigrants. “Raise your hand if your government plan would provide coverage for undocumented immigrants,” said NBC’s Savannah Guthrie. All hands went up.

President Trump immediately took to Twitter and called out the radical Democrats for not putting American citizens first, writing, “All Democrats just raised their hands for giving millions of illegal aliens unlimited healthcare. How about taking care of American Citizens first!?” He asked for America. That’s the end of that race!” (Video Below)

Related: Sanders Responds After Trump Increases Pressure On Sanctuary Cities: ‘It’s A Sad Day When Mexico Is Willing To Do More Than Dems’)