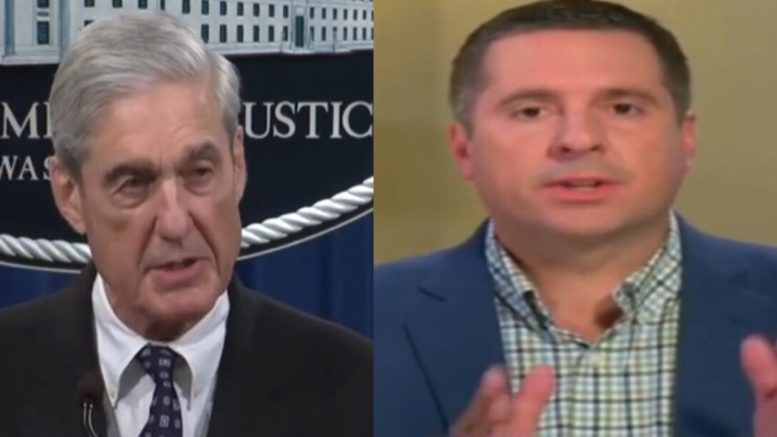 Congressman Devin Nunes (R-CA) spoke with host Judge Jeanine Saturday on Fox News’ “Justice” where he weighed in on former Special Counsel Robert Mueller who is set to publicly testify July 17 before the House Judiciary and Intelligence Committees.

Nunes believes that Mueller could “throw a monkey wrench” into matters related to the Russia investigation during his testimony and also expressed concern about what Andrew Weissmann, Mueller’s pitbull, might say behind closed doors as part of the deal with congressional lawmakers.

The House Intelligence Committee ranking member said, “[Mueller’s] like a bad penny, he’s just won’t go away. He wants to continue this job and I don’t know which way he’s gonna go. There are two trains of thought out there. One is that he’s just not going to say anything, which is very possible. But it’s also very possible too that he could throw a monkey wrench in things.”

“Now what’s odd about this is… supposedly he’s only agreed to testify for four hours. Four hours with the House Intelligence Committee and the House Judiciary Committee is not enough time to get everyone’s questions in. In addition, people should know he’s not willing to testify as of now behind closed doors and he’s supposedly going to send in Andrew Weissmann and his team of geniuses that came up with these conspiracy theories. And that’s not even going to be translated. So stay tuned, we don’t know the rules of the road yet, but we’ll find out,” he added.

Last week House Intelligence Chairman Adam Schiff (D-CA) said during an interview, “There’s no limitation on confining his testimony to the four corners of the report. That may his desire, but Congress has questions that go beyond the report.”

Nunes responded to Schiff’s statement and admitted, “Well, I don’t want lightning to strike the studio there in New York Judge, I actually agree with Schiff. If Mueller comes in to testify, he has to answer every question that members of Congress have for him, and he should. If he thinks it’s classified– if he’s somehow gonna get into some classified information, then he needs to go down into a secure area so that we can ask him the questions there on the record.” (Continued Below)

Nunes said a question he wants to ask Mueller is how far the counterintelligence investigation into Trump’s campaign goes, even as the FBI claimed it started in July 2016.

Related: Nunes Reveals The Key Component Of the ‘Mueller Dossier’ He’s Now Focusing On: ‘We’re Calling Him Out’)

(Related: After Laying Out His Questions For Mueller, Collins Exposes How Nadler Went Behind His Back: ‘You’re The Ranking Member’)