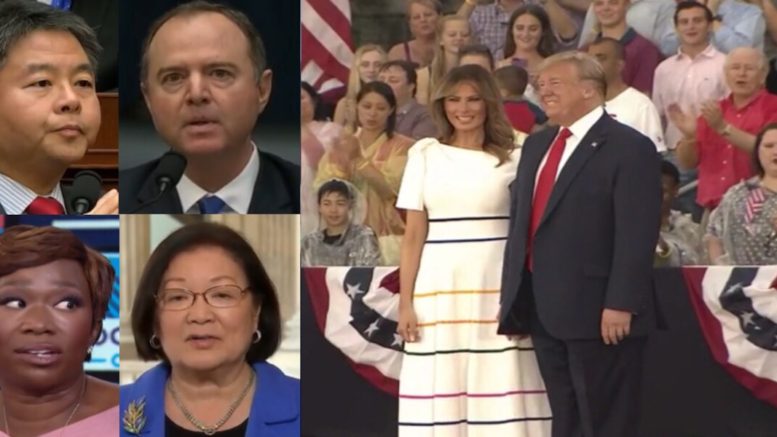 The media ran headlines right up to the day of President Trump’s Independence Day speech predicting only a “tiny crowd” would show up. How spectacularly wrong they were.

Further, congressional leaders laughed and mocked the President along with patriots who showed up to celebrate America’s birthday, but it backfired “bigly.”

On Independence Day, Patriotic American’s stretched the full length of the national mall on July 4 to celebrate America and hear President Trump’s “Salute to America.”

But this only angered the media as they didn’t even bother to broadcast the events, while some lawmakers vented their frustration on Twitter.

Rep. Ted Lieu (D-CA) laughed that there was rain on Independence Day writing, “More proof that God has a sense of humor and karma is real.”

Sen. Mazi Hirono (D-HI) said, “With tanks in the streets for the Trump Show and immigrant children locked in cages, the 4th of July is not a celebration of @realDonaldTrump’s cruelty and vanity. Today, I’m celebrating a country that welcomes immigrants, diversity, and strives to become a more perfect union.”

Rep. Tulsi Gabbard (D-HI) was the voice of reason among Democratic candidates, but that came to a screeching halt when she tweeted, “The self-serving politician that he is, Trump has succeeded in making July 4th about himself, and in doing so, further divided our country. This on a day when our nation’s president should be uniting us.”

How foolish they look as “Salute to America” was not about President Trump, as they and the media predicted. (Continued Below)

It wasn’t just lawmakers, the left wing media was in on it too. Here’s an example of the media outraged about a Patriotic President ahead of Independence Day:

Once again these ingrates got upstaged by President Donald Trump. The liberal media are so afraid of the president’s winning agenda. pic.twitter.com/4O11HgI9Oq

Rep. Ted Lieu literally laughing about rain on those who showed up to celebrate America, only to be slapped down by Jim Hanson:

Hate to ruin your day hater

We all had a blast
Pure patriotism
No politics pic.twitter.com/30tR9HHSMU

Sen. Mazie Hirono spewing her hate, but patriots called her out:

Full of hate!
Nothing our President does makes these people happy!
Always find a way to twist things and make them seem bad. Our country has always been proud of our military.
Go live some where else senator!
We also know what you mean by migrants you mean voters right. 🤦🏽‍♂️

Here is a thought. Why don’t we send all the people crossing our border illegally to Hawaii? Seems to make sense to me and the senator seems to be receptive to the idea. Time to send them where they are wanted by the dimms.

Rep. Adam Schiff claiming President Trump celebrated “Swamp Day” by making July 4th an ode to himself and crying that he accepted fireworks:

Those fireworks were the unused ones from HRC victory speech. @realDonaldTrump bought them for pennies on the dollar from a DNC liquidation sale! 🤗😛😜🤪

We once thought Rep. Gabbard was sane. We were wrong as she claimed that President Trump “succeeded in making July 4th about himself,” and further “dividing the country”.

The self-serving politician that he is, Trump has succeeded in making July 4th about himself, and in doing so, further divided our country. This on a day when our nation’s president should be uniting us. #IndependeceDay

Dr. Sebastian Gorka posted a picture for CNN’s Anderson Cooper and Don Lemon, MSNBC’s Joe Scarborough, Rachel Maddow, and Joy Reid writing, “This is for you”:

Ben Garrison who makes those awesome political Trump cartoons posted two pictures side by side expressing, “Well, that’s embarrassing isn’t it!” that shows protestors trying to be relevant verses thousands of patriots:

This is a great speech. All those making a fuss about it look increasingly ridiculous with each passing minute. https://t.co/PP9fjemnjG

And we leave you with a display of fireworks in America’s capital: