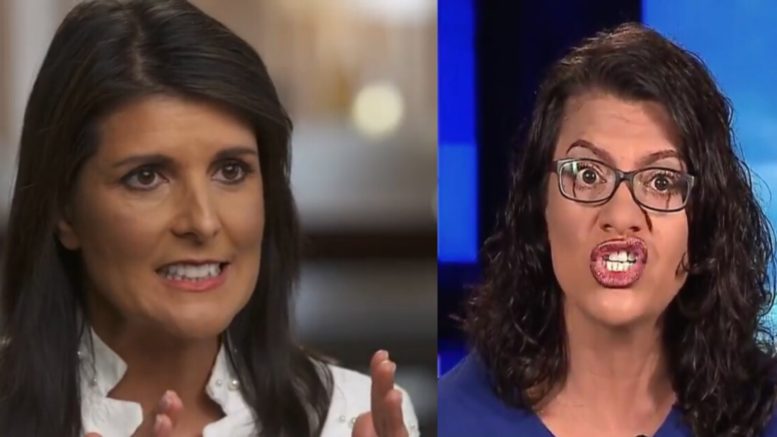 Sunday on ABC’s “This Week”, Rep. Rashida Tlaib (D-MI) spoke with host Martha Raddatz about the crisis and “conditions” at the Southern border.

Tlaib was one of four freshmen Democrats who opposed a $4.5B bill to give emergency humanitarian relief to migrant children in the border detention centers and was pressed during her interview as to why she voted “no.”

Martha Raddatz directly asked Rep. Tlaib why she voted against the humanitarian relief bill: “[Kevin] McAleenan, has been sounding the alarm for months for resources to help the migrants. You voted against the $4.6 billion emergency border bill to deal with the surge of migrants, that included almost $3 billion to provide shelter and care for unaccompanied children. Acting Secretary McAleenan says those funds are critical to get children out of CBP custody and transfer, even if the bill didn’t have what you wanted.”

Tlaib nodded her head smirking and declared that she was “proud” of voting against the bill.

Tlaib claimed that agents pulled her aside to tell her that money won’t fix the crisis at the border and that the agents weren’t trained to separate children. (Continued Below)

“Three agents took me aside, away from my colleagues and said more money is not going to fix this, that they were not trained to separate children, that they don’t want to separate two-year-olds away from their mothers. That’s not what they were trained for, that’s not what they signed up for in their service to our country. They signed up to protect the border, not to separate children, not to put people in cages. They all said this is a broken system, this is inhumane. I mean these are also human beings, these are also fathers and mothers themselves,” Tlaib said.

Former United Nations Ambassador, Nikki Haley, caught wind of Rep. Tlaib’s comments calling her out for complaining about the situation at the border but opposing the humanitarian aide.

“Unreal that Rep. Tlaib complains every chance she gets about the situation on the border yet when given the opportunity to add $4.6 Billion in aid you vote against it?? Shameful. #YouDontReallyWantASolution,” Haley wrote on Twitter Sunday. (Video Below)

Four Democrats opposed the vote — they were all freshmen Democrats, and arguably the highest profile freshmen from the 116th Congress: Reps. Alexandria Ocasio-Cortez, Ilhan Omar, Rashida Tlaib and Ayanna Pressley. All four said earlier in the week they would vote against the bill due to its funding of Immigration and Customs (ICE), which they have called for to be abolished, reported ABC News.

Unreal that Rep. Tlaib complains every chance she gets about the situation on the border yet when given the opportunity to add $4.6 Billion in aid you vote against it?? Shameful.#YouDontReallyWantASolution https://t.co/3jiYlMzqru