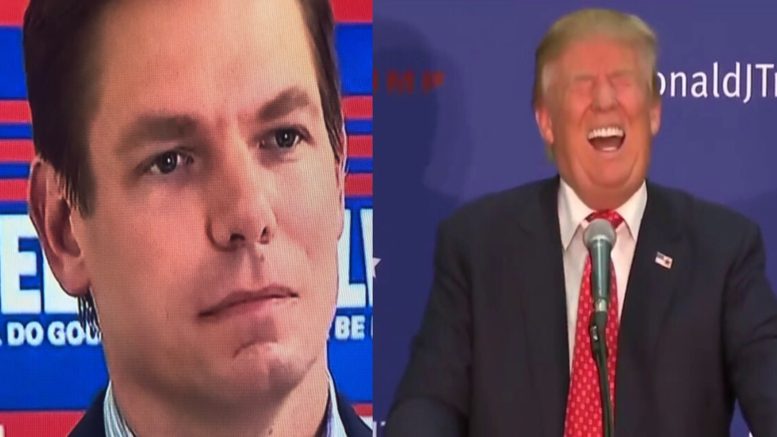 Swalwell, led the charge of collusion conspiracy alongside his pal Rep. Adam Schiff (D-CA), who both claimed to have evidence that President Trump colluded, along with calling Trump an agent of Russia and demanding his impeachment.

The California lawmaker, who has lagged in polls, has formally become the first in the crowded Democratic field to drop out of the contest since the race took shape this spring. He took part in the first series of debates late last month.

Last week during an interview on CNN, Swalwell tried defending his reasoning for why he still has an asterisk next to his name, instead of a countable number in the recent polls.

“So it’s early as you know, just under 500 days until the next election. But also what’s interesting about that poll is that 57% of the people polled did not watch the debate. Yeah, it’s early. You know I got about 4 minutes total to talk. Others like the vice president and, you know, people who are polling higher right now talked for about 12 to 13 minutes,” Swalwell claimed.

Swalwell made gun control the centerpiece of his presidential campaign, calling for legislation aimed at combating gun violence, but it did not pan out so well after suggesting in November that the government use nuclear weapons against those who did not obey with a “hypothetical” gun ban. (Continued Below)

During his press conference on Monday, Swalwell said he had made progress on the goal of focusing the debate on gun control. “Today ends our presidential campaign. But it is the beginning of an opportunity in Congress. I have no regrets. I’m excited about what we’ve done,” he said at the presser exactly three months after he launched his campaign back in April.

He also posted on Twitter Monday officially ending his campaign and wrote, “I want [to] thank my supporters & friends, my staff, & my family for making this journey possible. I’ll never forget the people I met & lessons I learned while traveling around our great nation. Though our campaign is ending our mission to end gun violence is just beginning…”

Looks like Swalwell won’t be banning anyone’s firearms, after all. (Continued Below)

It’s worth noting last month, Swalwell said, “I know this country, and I can beat Donald Trump.” [Emphasized.]

BREAKING: Rep. Eric Swalwell announces he's dropping out of the 2020 presidential race, saying he had made progress on goal of focusing debate on gun control.

"Today ends our presidential campaign. But it is the beginning of an opportunity in Congress." https://t.co/Mo3U0M1lPQ pic.twitter.com/WynGE6QlVk

I want thank my supporters & friends, my staff, & my family for making this journey possible. I’ll never forget the people I met & lessons I learned while traveling around our great nation. Though our campaign is ending our mission to end gun violence is just beginning… pic.twitter.com/voEJRpYd2R

“There will come a time when you believe everything is finished. That will be the beginning.” Louis L'Amour, Lonely on the Mountain.

Thank you to my family, staff, supporters & constituents for always believing. Nothing is finished. Our work to #endgunviolence goes on. It must.

Senate Majority Leader Mitch McConnel’s team posted comments from Swalwell made over the weekend, in which Swalwell said McConnell would not be re-elected in 2020 and could therefore not block gun control legislation pushed by a Swalwell administration and passed by a Democratic-controlled House. “Good work, Swalwell,” the staff wrote on Monday.

Peter Hanson wrote, “This is the moment Swalwell became president.”

This is the moment Eric Swalwell became president pic.twitter.com/k6bb3XUedb

Eric Swalwell polling at 0.0% must have seen this photo as he just dropped out of race, 24 to go! pic.twitter.com/HrPl3I3QuW

Eric Swalwell will NOT be President.

SHOCKER! Eric Swalwell is dropping out from his run to be President of the United States of America.

What a complete and total clown.

The fact that anyone let him on the debate stage in the first place is an embarrassment of epic proportions.

What I wanna know is which 2020 Democrat is gonna get Eric Swalwell’s 0% support?

In February, Swalwell said he was "burning the boats" and wouldn't run for House again.

He's telling reporters now that he'll run for his House seat again. "Because we ran a credible campaign, I'll be able to advocate even more effectively for my constituents."

Because everyone is salivating for Swalwell’s endorsement. https://t.co/2KkmKGxYjN

Some of these other candidates should follow Swalwell's lead. #BetoFORTEXAS

Eric Swalwell shooting his shot for the Democratic nomination pic.twitter.com/OkHYsleHv1

We know that you and the rest of America are going to miss the @ericswalwell campaign, so we collected the very tippy top moments of this journey so we can all go back and relive those nostalgic moments. pic.twitter.com/zhBlUufJu7