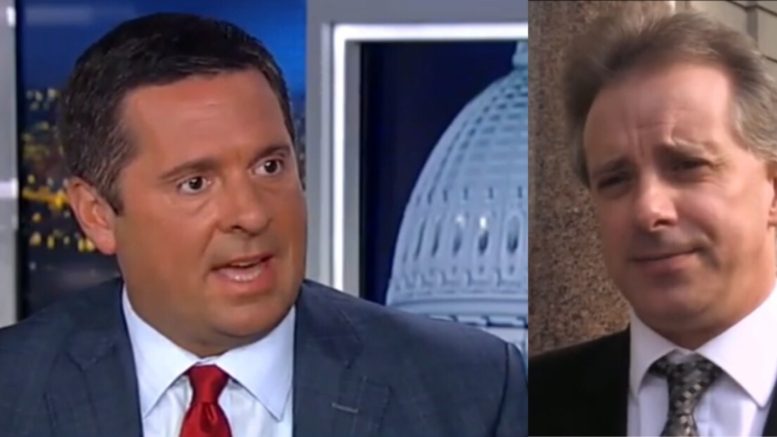 On Tuesday, Herridge could confirm that the key witness outside of the FBI and Justice Department who had agreed to talk with the Inspector General, Michael E. Horowitz is, in fact, the former British spy, Christopher Steele.

Ranking member on the House Intelligence committee, Devin Nunes (R-CA), spoke with host Shannon Bream on Fox News Tuesday where he weighed after Christopher Steele, the former MI6 agent, who created the dirty, Clinton bought and paid for Russian dossier was grilled by federal prosecutors in the U.K. in June, that reportedly lasted over 15 hours and conducted by lawyers that were working for the DOJ’s Inspector General, Michael Horowitz.

Nunes said the House Republicans tried to get Steele to come for an interview, but he refused. “This is a man who made up this entire document, as you’re starting to see it’s unraveling. His sources are not real, or if they are real, they’re second and third hand, so a lot of this is just made up. I think the more that comes out people will begin to see that there were 17 different installments of this document of the dossier,” he said.

Nunes explained that the FBI “claimed” they didn’t have any of this information from Steele until the fall of 2016–before they got the FISA warrant. “That’s not true, that’s a lie. It’s highly improbable that they didn’t have pieces of Steele’s phony work before that,” Nunes stated.

He noted that after the DOJ talked to Steele, and “if” he was honest, the Inspector General may know exactly when Steele was briefing FBI agents. “We think it has to be well before July 30… when the FBI was actively involved and likely working with Fusion GPS at the time,” he added. (Continued Below)

However, the most interesting part of the interview came when Rep. Nunes pushed back at an article written by Natasha Bertrand at Politico entitled, “Trump dossier author Steele gets 16-hour DOJ grilling“.

Bertrand wrote, “The extensive interview with Steele, and the investigators’ sense that he offered new and important information, may dampen expectations among the president’s allies who’ve claimed that Steele’s sensational dossier was used improperly by the bureau to “spy” on the campaign.”

“I don’t pay attention to mainstream media and what they write.” Nunes expressed to Shannan Bream after she read an excerpt from the article. “That statement that you just read makes no sense on the face of it. Either Steele was credible and he had credible sources, or he did not.”  [Emphasized] (Continued Below)

“The fact remains that they used that garbage that was paid for by a political campaign before a court. So we have really two separate issues: Steele’s credibility, which he has none, also what FBI did before FISA court, which they have no credibility. If you remember, we have told the American people that this was largely based on this Clinton paid for dirt, they didn’t tell the court, they used fake news stories– stories that they planted themselves– that Steele met with these reporters.

The reporters basically repeated what Steele told them. The FBI used that to support the FISA warrant against an American citizen. There’s other stuff that is left there, that the American people don’t know about that is equally as bad, or worse in my opinion. “

“Without the dossier, they would not have been able to get the FISA warrant,” Nunes said those are the words of the highest level of the FBI. “And, the rest of what they claimed is so critical, is I believe, even worse than using dirt from a political campaign.” (Video Below)

(Related: Nunes Doubles Down, Demands Answers From The FBI In Regards To Steele & Kavalec: ‘This Is Obstructing Our Investigation’)