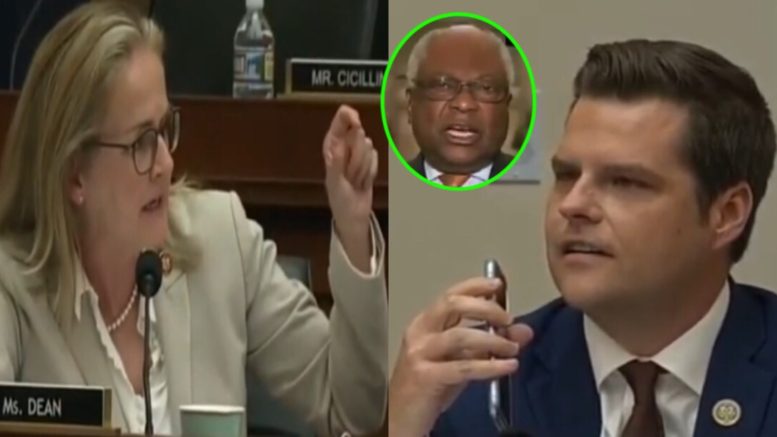 The House Judiciary Committee held a markup Thursday for more subpoenas and this time to 12 of former special counsel Robert Mueller’s witnesses, along with markup for resolutions to authorize subpoenas for documents and testimony from current and former Administration officials relating to the Trump Administration’s “zero tolerance” policy.

Congressman Matt Gaetz (R-FL) exposed the Democrats for their hypocrisy and fake outrage they have stirred up in that last few weeks concerning the crisis at the border, and all the while, Republicans for months, have been trying to pound it in their thick heads that there is, in fact, a crisis at the southern border, calling on Congress to act.

Rep. Gatez was prepared with his evidence to prove how phony Democrats really are and played audio from their own leadership earlier this year.

“The Gentle lady from Texas in her prior claim of time said it was ‘offensive’ to assert the Democrats were in denial about the crisis on the southern border,” Gaetz said referring to Rep. Veronica Escobar (D-TX). “I would invite my Democratic colleges to go to my official Twitter account where I have posted an interview from January 9, 2019. It was on CNN, not exactly a hostile network for you folks. Well, let me just play what the question was… and it’s Jim Clyburn the Democratic Whip answering the question.”

Majority Whip James Clyburn (D-SC) was asked on fake news CNN, “Is there a crisis at the border? The President said there is a humanitarian crisis at our border? Is there?” To which, Clyburn laughed and responded, “Absolutely not.” [Ephasized]

Gaetz looped the audio and played it over and over for everyone to hear it, which triggered Madeleine Dean (D-PA) and she interrupted Gaetz: “Point of order. Is it appropriate for a member to just put on a loop? A teeny soundbite out of context? Is that allowed?” (Continued Below)

Chairman Nadler responded, “The gentleman controls the time. I’m not aware of any rule that would preclude him from doing so.”

Gaetz continued, “Thank you, I think I still control the time, and I think that’s quite something. When you’re fed back your own words from your own leadership from earlier this year, you think that’s out of context and not appropriate and not allowed.”

“We didn’t raise the issue. It was the gentlelady from Texas that said, ‘These allegations from Republicans that we were in denial… that they’re offensive.’ We’ve always known of the crisis and the Democratic Whip laughed! [And he said] absolutely not. [He] laughed, he thought it was laughable, thought it was funny,” Gaetz declared exposing Democrats’ hypocrisy. (Video Below)

“You know who doesn’t think it’s funny? The Trump administration because Secretary [Kevin] McAleenan has been ringing the warning bell for months about the crisis. He begged you all to take action more quickly!” he declared.

(Related: In His Opening, Rep. Collins RIPS Nadler & Dems For ‘Another Round Of Premature Subpoenas’: ‘Here We Go Again’)

Gaetz noted it is appropriate to question why the facilities are overcrowded, but said, “It wasn’t the Republicans that were in denial, it was all of you and it was in your own words from your own leadership. Be offended with the Democratic Whip, not House Republicans!” he concluded.

Watch the two videos below:

**After months of denial, Dems finally admit @realDonaldTrump is right. There is a CRISIS on our southern border. pic.twitter.com/Hsg2N9Yg25