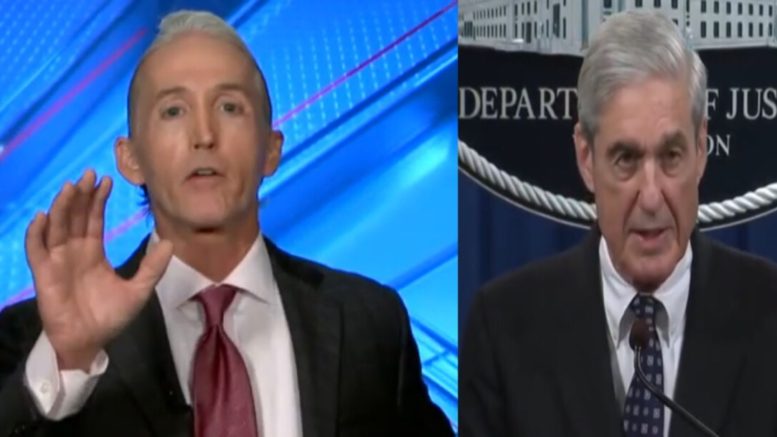 As Swamp Drain previously reported, Mueller remains a reluctant witness and a number of options are in consideration.

On Monday, Attorney General William Barr said in an interview that the Justice Department would support Robert Mueller if he decides he doesn’t want to subject himself to questioning from congressional Democrats.

“I was disappointed to see [Mueller] subpoenaed, because I don’t think that serves any purpose dragging Bob Mueller up, if he, in fact, is going to stick to the report. It seems to me the only reason for doing that is to create some kind of public spectacle,” Barr said.

Asked if he thinks Robert Mueller will take a pass, Trey Gowdy said, “Remember, he doesn’t want to come at all. He hadn’t said much in the last two years.”

“One thing he said pretty clearly was, ‘I hope this is my only public statement.’ So, they’re bringing him, they want to keep the story alive. He’s not gonna participate in that. He’s not gonna answer anything outside of the four corners of his report.” Gowdy said. (Continued Below)

“The focus will be on the questions. Mueller is not gonna give you any interesting answers. I have quizzed him before,” Gowdy expressed. “It’s gonna be boring.”

(Related: Gowdy’s Prediction On Mueller Testifying: ‘The Hearing Next Week Will Be A Carnival; It Will Be A Freak Show’)

Gowdy believes that Mueller will answer a question and nothing more. “You will learn nothing Wednesday except a lot of my former colleagues think they’re great questioners and think that they should have their five minutes. (Video Below)

(Related: Rep. Collins Reacts To Explosive Interview With Hemmer & Nunes: ‘We’ve Had These Feelings Before’)