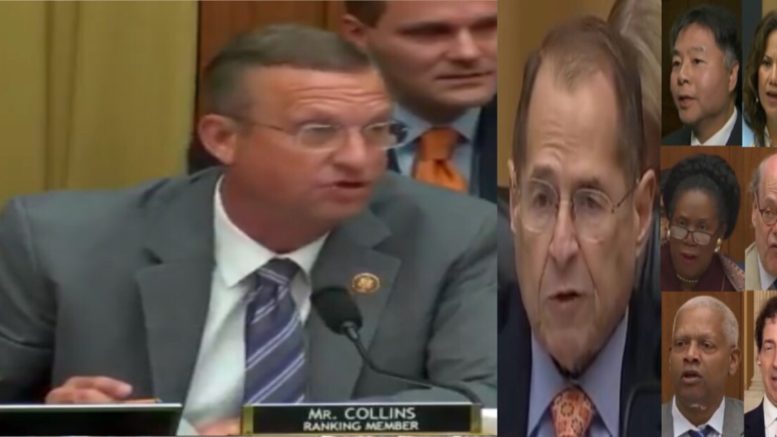 The House Judiciary Committee held a markup Thursday for more subpoenas and this time to 12 of former special counsel Robert Mueller’s witnesses, along with markup for resolutions to authorize subpoenas for documents and testimony from current and former Administration officials relating to the Trump Administration’s “zero tolerance” policy.

“Thank you, Mr. Chairman. Here we go again on another round and an episode of premature subpoena of authorizations brought to you by the Democrats on the House Judiciary Committee,” Rep. Collins began.

“Aside from the lack of specificity and a lack of a lot of things and a lack of maybe a law school of an understanding of a subpoena, this is again another trek down an empty road. In a world of congressional oversight in today’s markup makes absolutely no sense,” Collins said.

“First, we have zero tolerance policy in an area where the Chairman has sent one single request to the Trump administration, January 11, 6 months ago, and not a single followup request since, ” Collins said as he listed off several occasions the Department of Homeland Security, Health and Human Services, Department of Justice and the White House have submitted documents pertaining to requested documents.

“Yet, the Chairman, out of the blue and without a single formal follow-up, wants to issue subpoenas for more documents. Second, [he] wants to issue a subpoena for information regarding the detention of children and families in a subpoena for information about the discussions or offers of presidential pardons to DHS officials and employees. The Chairman has only tangentially issued a document request, regarding detention, way back in January. A subpoena here is not only premature but unjustified. The Chairman has zero predicate for this markup today. Given this fact, I guess the Chairman was telling the truth when he said during an earlier subpoena authorization, he views the subpoena as the beginning of a dialog process,” Collins explained. (Continued Below)

Then, Collins called out Nadler for issuing subpoenas to people without even bothering to send a written request first.

“Third, the Chairman wants to continue a subpoena binge and issue an additional 12 subpoenas to individuals related to the Mueller investigation. The Chairman has made no formal contact with 3 of the former individuals during his chairmanship. The subpoena will in fact be, I guess as we’ve heard, the beginning of a dialog process. Once again, I want the emphasize, the Chairman has not sent even ‘one’ written request to 3 of the individuals on this list we are authorizing,” he said.

He noted that one of the 12 individuals, who is being subpoenaed, has produced documents to Nadler but it’s not enough. “He’s produced documents as well, but I guess the Chairman is going to reward him with yet, another subpoena because apparently, the first one wasn’t good enough. I guess there wasn’t enough dialog,” Collins added. (Continued Below)

“At least the Chairman is consistent. This is a pattern we have seen several times before. If you cooperate with him, you get a subpoena. If you ignore him, he’ll leave you alone. In the world of congressional oversight, these subpoenas make no sense at all. But in the world of politics, today’s markup makes perfect sense,” the ranking member said.

He pointed out that before Congress left for their July 4th recess at the beginning of the month, they were having a “scrabble” over funding for [the] “humanitarian crisis” at the border. “A crisis this committee has repeatedly failed to address… before we got back to town, however, we were greeted by the Chairman’s intention to go on a subpoena binge attempting to change the narrative and focus on issues he hasn’t touched for months at all. This is a very haphazard way of conducting congressional oversight,” Collins expressed.

The Georgia Congressman said that other committees have taken the lead that the Chairman wants to focus on because the Judiciary is trying to play catch up. He explained that Rep. Elijah Cummings (D-MD) issued subpoenas to DHS, DDS, and DOJ regarding the “Zero tolerance” policy back in February. He also pointed out that the Chairman has refused to review the lesser redacted Mueller report, instead he held the Attorney General in contempt.

“Meanwhile, Adam Schiff cut a deal with the Department and got access to the underlying documents. If the goal is truly to get information or testimony, our Chair is failing. But it’s repeatedly said if the goal is to political theater, we’re winning,” Collins declared.

He also revealed that all the members on the Judiciary Committee will not be able to ask former special counsel Robert Mueller questions next week.

Collins continued, “Now instead of having hearings where all of the members get to ask Robert Mueller questions, we’re having our legs cut out from under us by limiting the questions. Not all Republican members will be able to ask questions, not all Democrat members will be able to ask questions. This is an odd format– is the result of the Chairman not taking seriously this information and moving forward, and we’re all here to suffer it. It’s against House rules, but that’s another problem.” (Continued Below)

“Today’s subpoena binge is an effort to change the narrative, it’s a show of force. It’s a chance for the Chairman to prove to his rank and file and the rest of the Democratic caucus that we can be tough on the Trump administration after being pushed around for 6 months. Today is chance to show that we have what it takes, and we’ll not bow in the spotlight,” Collins said.

“However the truth is at this point, next week, the hearing is one of the largest most talked about investigations in two years and this committee got rolled– Intel committee gets to ask all their questions. This committee does not. This committee gets to divide the ‘have’s and the have’s not.’ We’re all elected, both sides. This is a farce, especially when it flies in the face of a 5-minute rule that is conveniently being ignored. Here we go again, and as I’ve had to say for the last 6 1/2 months, let the show begin,” the Ranking Member concluded.

One of the people subpoenaed today has already received a subpoena from the chairman and already produced documents. In the world of congressional oversight, these subpoenas make no sense at all. This is politics at its most desperate. pic.twitter.com/gQvtwVorn2