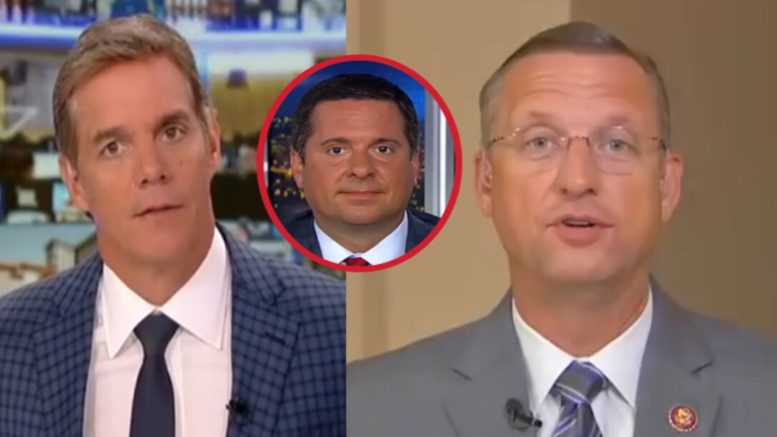 Ranking Member of the Judiciary Committee, Doug Collins (R-GA) joined anchor Bill Hemmer on Fox News Thursday where he weighed in on the upcoming Mueller hearing that is set to take place July 17.

Former Special Counsel Robert Mueller will testify for 4 hours before the House Judiciary and the House Intelligence Committees. Collins said it will start around 8:30-9:00 A.M.

Rep. Doug Collins said his first question will be to Robert Mueller if he still confirms that the report remains the same- that his findings have not changed.

“When you get to that point, then we also understand his investigation is closed, so there’s no new information that should be coming out here. These are the kind of things that we just need to frame the fact– that the report, as Mr. Mueller said himself, ‘It speaks for itself.’ That means there was no collusion, no charge of obstruction. If the Democrats have something, it’s on them to show this. Mueller has spoken, as he has said,” Collins explained.

Bill Hemmer revealed that he did a podcast with the Ranking Member of the Intelligence Committee, Devin Nunes (R-CA) and expressed that Nunes was breathing fire with a long list of questions he has for Robert Mueller.

Hemmer played a clip of the interview with Nunes and said, “In the end, this is what he concludes… to why all this matter needs to be cleared up, just listen…” (Continued Below)

“These are all a bunch of dirty cops, and I’ll tell you, some of them better go to jail or we’re gonna go down in a spiral in this country, because you will not have a Republican that will trust the FBI or the Department of Justice for generations to come,” Rep. Nunes declared. [Empasized] 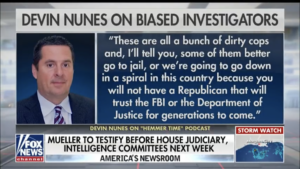 Collins responded to Nunes’ statement: “I think we’ve had these feelings before. I’ve been on your show before and talked about that corrupt cabal of [Peter] Strzok, [Lisa] Page, [Andrew] McCabe, [James] Comey, who were all at the start of this. I think this is where Bill Barr’s investigation that’s going on with Mr. Durham and also the [Inspector General]’s report that is going to come out.” (Continued Below)

Collins said he’s not going to give away his questions that he’s going to ask of Robert Mueller but noted that’s he’s fed up after what he’s seen over the past two years of the administration under former president Barack Obama. “[He] allowed this stuff to happen and it built from there. Those will be things that will come and out and are being investigated,” the Georgia Congressman said.

He wouldn’t say if Wednesday will be a bombshell or a dud but did explain that it will be whatever people want to make of it.

“I think at the end of the day it’s gonna say exactly what it was: nothing is there, nothing happened. The Democrats are banking everything, this is their closing statement and their closing statement will fall flat. The President was cleared in this, there was no collusion, no charge of obstruction. It’s time now to say, ‘Why didn’t you do other things?’ It’s time for Mueller to have to answer why he didn’t do something things in this report. That’s what we’re gonna be focused on,” Collins added.

Devin Nunes’ interview with Bill Hemmer can be heard [HERE]. (Video Below)

NEW #HemmerTime with @BillHemmer. This week, @DevinNunes discusses what he plans to ask former Special Counsel Robert Mueller, why he says someone must go to jail to restore faith in the FBI & more. Subscribe, rate & review! https://t.co/S0btu1NOjl

Related: In His Opening, Rep. Collins RIPS Nadler & Dems For ‘Another Round Of Premature Subpoenas’: ‘Here We Go Again’