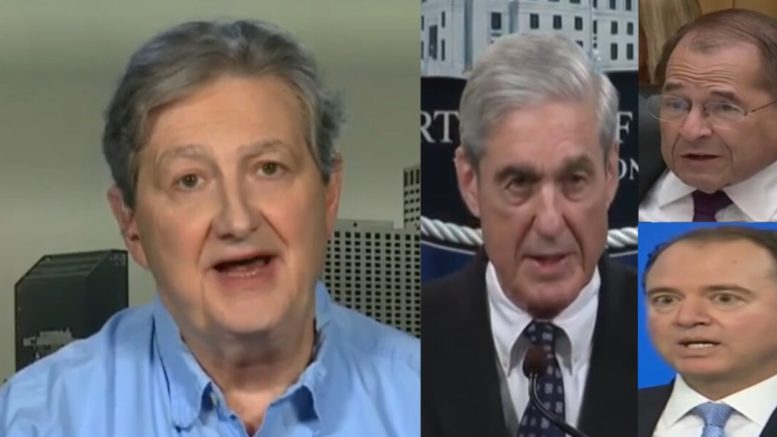 On the heels of Mueller’s testimony, it is now reportedly in “flux” and may be pushed back to July 24 due to a “breakdown in negotiations”.

Planning for former Special Counsel Robert Mueller’s highly anticipated testimony was thrown into disarray Friday as multiple sources said the hearing was delayed amid a “breakdown in negotiations” — yet others indicated it could still go forward next week as planned, reported Fox News.

However, the Democratic majority on the House Judiciary Committee maintained: “At this moment we still plan to have our hearing on the 17th and we will let you know if that changes.”

Senator Kennedy believes that the Democrats are trying to pull Mueller into the middle of everything “and take sides,” adding that Mueller’s job was to “call it like he saw it.”

“This is what he called and what he saw; no collusion and on obstruction of justice. What [Mueller] concluded was, ‘I don’t know. I’m not saying the President did it. I’m not saying he didn’t do. I just don’t have enough to bring an indictment, and I’m not bringing an indictment.’ Now, that’s what the Mueller report says. You can read it and draw your own conclusions, but that’s kind of the bottom line,” Kennedy explained. (Continued Below)

The Louisiana Senator believes that it is foolish for Robert Mueller to testify. “If he wants to testify, this is America, it’s a free country. But they’re just gonna try and pull him in the middle of this,” he reiterated.

“My Democratic friends on the House side are trying to keep this effort alive and they don’t want the allegations about the Russia collusion to ever end. At some point, they have to end! And Bob Mueller, after an exhaustive investigation, concluded no collusion and said ‘I couldn’t make up my mind on obstruction of justice,'” Kennedy explained. [Emphasized.]

“It’s done, as far as I’m concerned. The issue is dead as fried chicken. It’s over!” Sen. Kennedy expressed. [Emphasized.] (Continued Below)

Asked if he believes Robert Mueller will testify, Sen. Kennedy responded, “Personally, you can teach it round or flat. I don’t want to keep information from the American people, but the information is all in the report. And my guess, it’s just a guess, but I think Bob Mueller may be as smart as people say he is and he’s thinking ‘I’m getting pulled into a political trap here. And I’m thinking maybe I better exercise more wisdom than zeal, here.'”

“It’s up to Bob Mueller, but I can tell you what the end result is gonna be: just a political food fight and he’s gonna be right in the middle getting smacked!” Sen. Kennedy declared. [Emphasized.]

He added, “Mr. Mueller, look, it’s his call. If he wants to testify, that’s his business. But if I were Mr. Mueller, and I’m not… and they said look, ‘We want you to come [to] testify. Do you have anything else to say?’ My response would be– the short answer is: ‘no.’ The long answer is: ‘hell no, read my report.'”

(Related: In A Fiery Speech, Kennedy SLAMS House Dems Impeachment Talk: ‘Urinate Or Get off The Pot’)