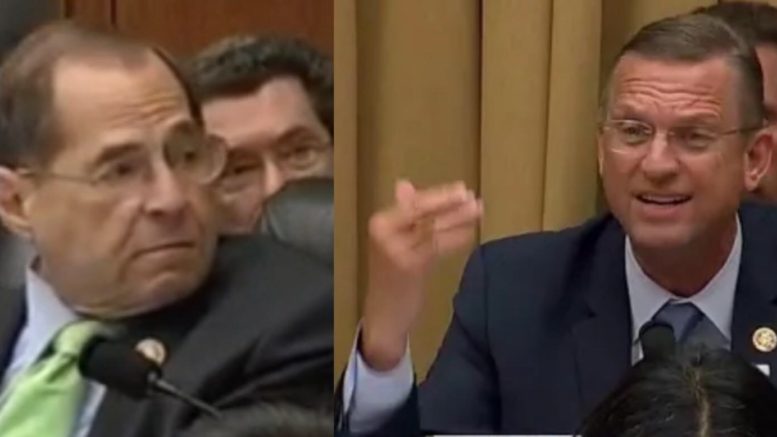 This takes place ahead of Robert Mueller’s scheduled testimony that is set to take place July 17, but now reportedly in “flux” and may be pushed back to July 24 due to a “breakdown in negotiations”.

Rep. Doug Collins (R-GA), the ranking member on the committee, slammed Chairman Nadler in his opening on Friday for “having a third Mueller report hearing”, instead of addressing more important issues and legislating.

Collins began by recalling being back in high school during Ms. McCall’s American Government class. “It’s the proper role of government, the proper check, and balances… what is Congresses role and what is the President’s role and what is the Judiciary’s role? We could stop this hearing right now because the Chairman just laid out all the congressional routes and avenues that Congress has to it,” he said after Nadler’s opening.

“But instead, we come here today to have ‘another’ almost ‘impeachment hearing’, but not an ‘impeachment hearing’. We want to get facts, we want to do this. No, we’re just waiting on and on. I’m trapped back in 9th grade. Ms. McCall was a wonderful teacher, but I don’t want to go back through it again!” he expressed. (Continued Below)

“This is black and white, we know this problem here,” the Georgia Congressman said. “So what are we not doing here?

Collins pushed back at the Chairman for wasting time, after arguing over subpoenas the day before, instead of using markup to address more important matters such as immigration.

“Lets actually get to solving real issues, instead of having theoretical college discussions on what is Congress’ power! If we don’t know what Congress’ power is now, this hearing is not gonna help us! In fact, it’s ridiculous!” he declared. [Emphasized] (Continued Below)

“Let’s solve problems, process. We know what the process is. The majority just can’t find their way to figure out what they want to do with that process,” Collins said.

“We know what the constitutional process is. We just want to dance around it to keep another round of stories that the Judiciary committee is pursuing… harassment… and doing what it needs to do to make sure this administration is held accountable because we don’t like him! The economy is good, life is going better, and we don’t like it because we don’t like the November 2016 election. That’s all this is about!” He said, slamming the Trump haters.

“So for everybody who didn’t get to be in Ms. McCall’s 9th grade American Government class at North Hall Highschool, this may be your opportunity,” Collins joked. “Get your hornbooks out, get your study books out. This is going to be a constitutional process of what we already know is our processes. But, we’re gonna have some experts tell us what those processes are.”

“Mr. Chairman, there’s a lot of things you could be calling today, this isn’t one of them! Why don’t we actually take up real legislation to fix the border crisis, to fix the issues that we all talk about up here? Instead, we have hearings. Our body is to actually legislate! Let’s start legislating and stop the show. But as again… the popcorn’s cooking… it’s time as I’ve always said, ‘Let the show the begin,'” the ranking member concluded. (Video Below)

(Related: After Laying Out His Questions For Mueller, Collins Exposes How Nadler Went Behind His Back: ‘You’re The Ranking Member’)