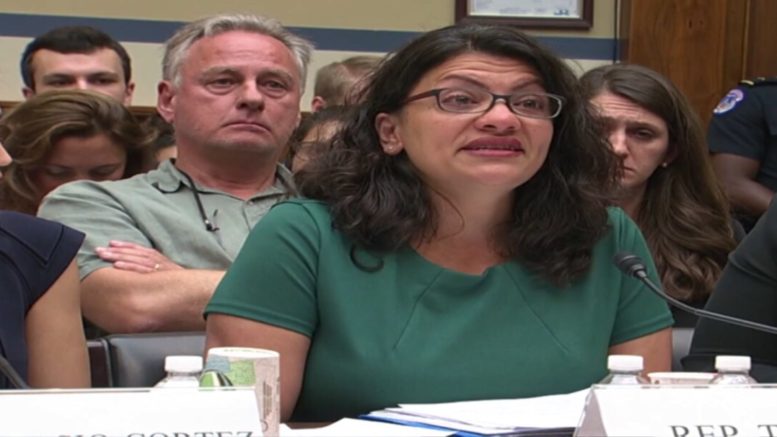 The House Committee on Oversight and Reform held a hearing Friday about the southern border crisis and the “treatment of detained migrants.”

Rep. Rashida Tlaib (D-MI) claimed that no person in the United States is “illegal,” while testifying before the committee hearing.

The Friday hearing was titled “The Trump Administration’s Child Separation Policy: Substantiated Allegations of Mistreatment,” and focused on the handling of migrants in CBP custody. The hearing was originally only going to feature the testimony of four Democratic lawmakers, but Chairman Elijah Cummings at the last-minute allowed four Republicans from border states to join in after Ranking Member Jim Jordan asked that their perspective also be included, reported The Daily Caller.

Tlaib is the daughter of Palestinian immigrants and she spoke about the alleged mistreatment of illegal immigrants being held in detention facilities and claimed that a “dangerous ideology” was governing the country.

She asked everyone not to use the term “illegal,” as she believed it was an offensive word.

“First, no one is illegal. That term is derogatory now because it dehumanizes people. You can say any other forms of maybe ‘coming in without any regulations’ or so forth, but the use of ‘illegal’ is disrespectful and I ask my colleagues to try in so many ways to not dehumanize our immigrant neighbors who are trying to come in for safe haven,” Tlaib said. (Continued Below)

In an effort to paint a grim picture of Customs and Border Protection (CBP), the Michigan Democrat spent a significant amount of her time describing the different people she met in their custody, recounting moments she met a young child, a father, a pregnant mother and others who were detained after illegally crossing the border, per Daily Caller.

“The dehumanization is not only with those families but also with the agents that we’ve had to do this to these families,” Tlaib concluded in her testimony. (Continued Below)

Other lawmakers, however, took issue with the idea that the term “illegal” is offensive to use.

“If anyone is in the United States unlawfully, then they are, in fact, an illegal,” said Kentucky GOP Rep. James Comer later on during the committee hearing. “And let me be clear: This is not a manufactured crisis. This is a problem that is getting worse every day, yet this Congress continues to do nothing about the real problem at the border.”

Sunday during an interview on ABC, Tlaib declared that she was “proud” of voting against a $4.5B bill to give emergency humanitarian relief to migrant children in the border detention centers.

Four Democrats opposed the vote — they were all freshmen Democrats, and arguably the highest profile freshmen from the 116th Congress: Reps. Alexandria Ocasio-Cortez, Ilhan Omar, Rashida Tlaib and Ayanna Pressley. All four said earlier in the week they would vote against the bill due to its funding of Immigration and Customs (ICE), which they have called for to be abolished, reported ABC News. (Video Below)

(Related: ICE Prepares For Approximately One Million Deportations As Congress Fails To Agree On A Solution)