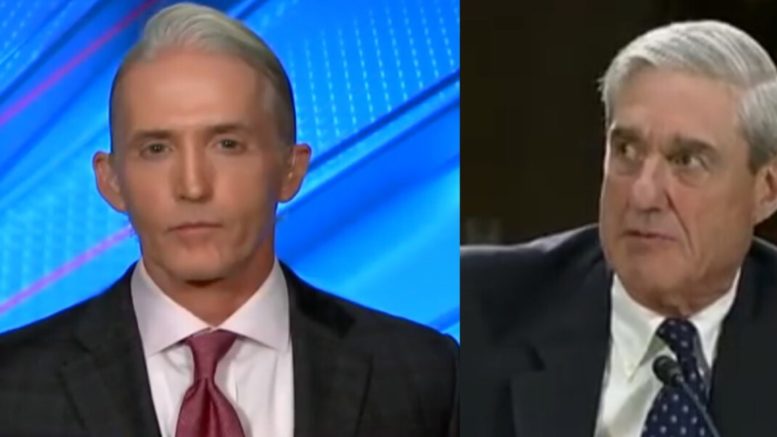 Gowdy believes only one burning question will make a difference at the Mueller hearing and would ask given the opportunity.

“Why didn’t you indict President Trump?”Gowdy asked of Mueller. “Was it a factual deficiency or was it that OLC opinion? That is the only question that I think is gonna change any dynamic coming out of that hearing.”

Mueller said during his press conference in May that charging President Trump with criminal wrongdoing was “not an option we could consider” as a result of the Office of Legal Counsel opinion that a sitting president cannot be indicted.

“The special counsel’s office is part of the Department of Justice, and, by regulation, it was bound by that Department policy,” Mueller said. “Charging the president with a crime was therefore not an option we could consider.”

Gowdy thinks Mueller has given two different answers: “He told Bill Barr because there was a factual deficiency that he kind of alluded in his press conference to this DOJ OLC opinion.” (Continued Below)

After Mueller gave his press conference, the DOJ and the Special Counsel’s Office released a joint statement that said, “The Attorney General has previously stated that the Special Counsel repeatedly affirmed that he was not saying that, but for the [Office of Legal Counsel] opinion, he would have found the President obstructed justice.”

“The Special Counsel’s report and his statement today made clear that the office concluded it would not reach a determination – one way or the other – about whether the President committed a crime. There is no conflict between these statements,” they said.

“I think what the Democrats are going to focus on, had that policy not been in place, would you have indicted a private citizen Donald Trump? That’s the only thing that could come out of this for Democrats that would be significant,” Gowdy explained. (Continued Below)

He said Mueller’s answer has to be “no” for a lot of reasons. “I’m sorry but firing Jim Comey is not obstruction of justice and if it were, then Rod Rosenstein would be in trouble and not President Trump,” he said.

“That is the question that concerns me the most if I were still a Republican member of the House. It is what is going to be his answer. Was it the OLC opinion, or was it a factual deficiency. The rest of it he’s just gonna stick with the four corners of his report, Gowdy continued.

“If you’re a Republican, you’re gonna want to ask about bias, you’re gonna wanna ask about what you didn’t look into. I would spend all of my time getting Mueller to talk about things he didn’t bother to look for, which is the factual predicate for the Russia investigation, anything related FISA process, [Christopher] Steel,” he said. (Continued Below)

The former South Carolina congressman concluded that we are not going to learn a lot from the hearing unless Robert Mueller “fumbles the answer on why he did not indict Donald Trump,” otherwise “this thing will continue to go on for another 6-12 months.”

(Related: Fitton Reveals Why It’s Time For Mueller To Be Investigated: Comey & Mueller Are ‘Two Peas In A Pod’)