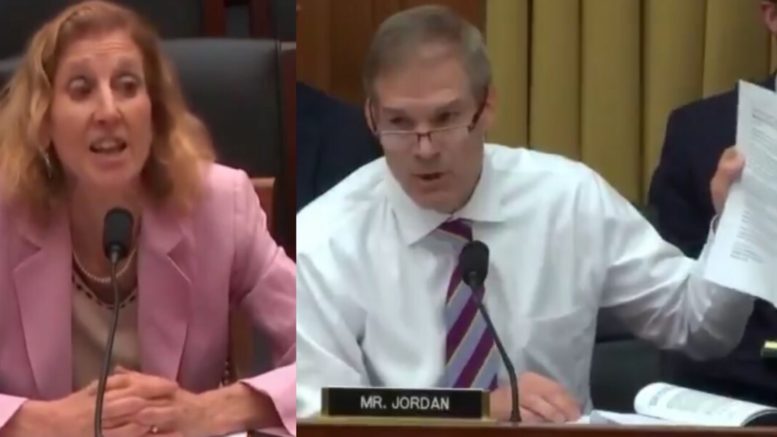 This takes place ahead of Robert Mueller’s scheduled testimony that is set to take place July 17, but now reportedly in “flux” and may be pushed back to July 24 due to a “breakdown in negotiations”.

Congressman Jim Jordan (R-OH) grilled Caroline Fredrickson, who is the head of the leftist “American Constitution Society”, exposing her for the fraud she is after she wrote an op-ed in The New York Times entitled: We don’t need to read the Mueller Report, in March.

Jordan began, “Before the Mueller report was made public, and actually, two days before Attorney General Barr did his first letter to tell us anything about the report, which was March 24 of this year–two days prior to that March 22, 2019, you said this, ‘The question isn’t whether members of the Trump campaign conspired with Russia to sway the 2016 elections, we already know they did.'”

He asked her point blank, “How did you know that before the report even came out?”

Fredrickson claimed, “We had seen multiple indictments, as well as prosecutions and convictions of people associated with Russia.” (Continued Below)

Jordan shot back, “But, shouldn’t someone normally who’s heading the Constitution Society… don’t you normally wait until the investigation is over? In this great nation, people are presumed to be innocent until proven otherwise. You were already making a finding– stating a finding as the head of the Constitution Society before we even had the report by the Special Counsel’s office.” [Emphasized]

Fredrickson responded, “There was quite a lot of evidence already in the record, and I think the Mueller report then goes further to lay out multiple instances of contacts between the Trump administration…”

The Ohio Congressman wasn’t falling for her narrative and interrupted her: “What’s interesting is you just mentioned the Mueller report. What’s interesting is that same day you said, ‘The question isn’t whether the members of the Trump campaign conspired with Russia to sway the elections, we already know they did’, even though we didn’t know that because the report wasn’t done. That same day you wrote an op-ed, you just mentioned the Mueller report, but you wrote an op-ed that same day March 22, 2019, where you said, ‘We don’t need to read the Mueller report’, and now, you’re telling us we do.” (Continued Below)

“So before the report came out, before Bill Barr said anything, you said, ‘We already know he’s guilty, and oh, by the way, don’t read the report.’ Now, you’re telling us we should read the report?” Jordan asked of Fredrickson.

She awkwardly laughed trying to blow it off but knew she was caught as a leftist hack who was brought in as an “expert” by the Democrats.

“The point was a rhetorical one, that there was already so much evidence out there that Congress needs to examine,” Fredrickson claimed.

Jordan was not having it. He held up her article and called her out declaring, “I have the headline right here: ‘We don’t need to read the Mueller report.’ You wrote that right?” he asked.

She tried to clarify, “I didn’t write the title actually. If you read the body of the opinion piece, you will see that it says Congress needs to get this report.”

Jordan continued to expose her: “But, here’s what you wrote [in] the second paragraph: ‘Mr. Mueller’s report may never go public, but we don’t need to peak at the recommendations anyway.’ So did you write that?”

Fredrickson confirmed that she did write it, so Jordan grilled her again: “But now, you’re telling us we should read the report?”

She agreed that it should now be read and stated, “Yes, I do. There’s much more in there. We knew a fair amount already, but now we know more. And I think Congress actually needs to see the full report and the evidence underlining it and understand how Russia interfered in our elections. Which again, I will state: I think it’s troubling that your side of the aisle doesn’t seem to want to examine….” (Continued Below)

Jordan stopped Fredrickson in her tracks and expressed, “I think it’s troubling that the head of the American Constitution Society said ‘We already knew [Trump] did something before the report was final.’ Now, you’re telling us to read the report. I’m gonna read [the Mueller report] on page two. Page two [reads] ‘The investigation did not establish members of the Trump campaign conspired or coordinated with the Russia government in its election interference activities.'” [Emphasized]

He continued, “First, you said ‘don’t read the report’, now you’re saying read the report! It directly contradicts what you said as the head of the American Constitution Society. And of course, the Democrats think it’s fine and appropriate to have the head of the American Constitution Society come and lecture us today and tell us how we need to move towards ‘impeachment’. I fail to get it. So what do you say about that sentence right there on page 2, now that you’ve changed your mind and say we should read the report– where the Special Counsel’s Office says, ‘The investigation did not establish that members of the Trump campaign conspired or coordinated with the Russia government in its election interference activities.'”

Fredrickson dodged the question and she instead claimed that Jordan didn’t read her article: “I think it’s unfortunate that you haven’t actually read the opinion piece that says Congress needs to see the full Mueller report. That is what the opinion piece says.”

Jordan fired off: “We’re talking about what you wrote, what you said, and what Bob Mueller said. You said don’t read the report. Here’s what’s interesting, Mr. Chairman. We have a witness here today, who before the Mueller report was out said, ‘We already know the President is guilty.’ Before Bill Barr issued his first statement on the report… ‘We already know he’s guilty.’ That same day that she said those things, she writes an op-ed saying ‘Don’t read the Mueller report,’ [be]cause if you do, you’ll find out what she claimed is absolutely not true! She’s an expert witness today!” [Emphasized]

She tried to suggest once again that Jordan did not read her “article”, but he argued he did and pointed out an exchange they previously had. “I can’t believe the Democrats invited you back! I did read, and you know what? I did not follow her advice. I read the Mueller report, and she’s telling people not to!” Jordan declared. [Emphasized] (Video Below)

Rep. Jim Jordan tweeted, “In America, we are innocent until proven otherwise. But the head of the leftist “American Constitution Society” claimed the President conspired with Russia BEFORE the Mueller Report was even released!”

In America, we are innocent until proven otherwise.

But the head of the leftist “American Constitution Society” claimed the President conspired with Russia BEFORE the Mueller Report was even released! pic.twitter.com/kKYXpJVTZ7