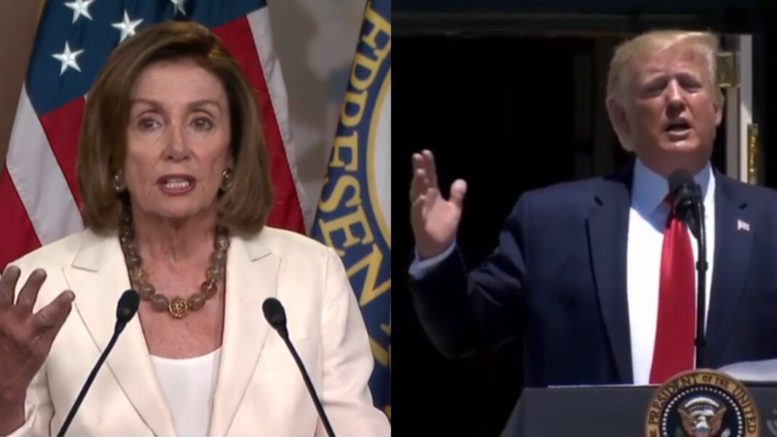 On Monday, Speaker Nancy Pelosi (D-CA) advised her fellow Democratic colleagues to support a resolution to “condemn” President Trump for tweeting that four Democratic congresswomen should “go back” to their countries.

This comes as President Trump doubled down and showed no sign of cowering from his earlier criticism of four “Radical” Congresswomen from the left.

“The House cannot allow the President’s characterization of immigrants to our country to stand. Our Republican colleagues must join us in condemning the President’s xenophobic tweets,” Pelosi wrote in a letter to House Democrats.

“This weekend, the President went beyond his own low standards using disgraceful language about Members of Congress,” Pelosi added. “Rather than attack Members of Congress, he should work with us for humane immigration policy that reflects American values.”

In the President’s tweets on Sunday, he advised the freshmen congresswomen to “go back and help fix the totally broken and crime infested places from which they came” before criticizing policies in the U.S. (Continued Below)

“So interesting to see ‘Progressive’ Democrat Congresswomen, who originally came from countries whose governments are a complete and total catastrophe, the worst, most corrupt and inept anywhere in the world (if they even have a functioning government at all), now loudly and viciously telling the people of the United States, the greatest and most powerful Nation on earth, how our government is to be run,” President Trump wrote on Sunday.

Just last week, Ocasio-Cortez had suggested in an interview with The Washington Post that Pelosi was engaging in a pattern of “explicit singling out of newly elected women of color.” (Continued Below)

However, Pelosi defended Ocasio-Cortez and the three other progressive lawmakers on Sunday after President Trump’s tweets. “When @realDonaldTrump tells four American Congresswomen to go back to their countries, he reaffirms his plan to ‘Make America Great Again’ has always been about making America white again,” Pelosi tweeted.”Our diversity is our strength and our unity is our power.”

On Sunday evening, the President doubled down after Pelosi defended the four freshman lawmakers. “So sad to see the Democrats sticking up for people who speak so badly of our Country and who, in addition, hate Israel with a true and unbridled passion. Whenever confronted, they call their adversaries, including Nancy Pelosi, ‘RACIST’.

“Their disgusting language and the many terrible things they say about the United States must not be allowed to go unchallenged. If the Democrat Party wants to continue to condone such disgraceful behavior, then we look even more forward to seeing you at the ballot box in 2020!” he added.

On Monday during an interview on “Fox and Friends”, Sen. Lindsey Graham defended the President and he pushed back at specifically at Alexandria Ocasio-Cortez (D-NY) and Ilhan Omar (D-MN), accusing Omar of being “anti-Semitic,” and calling the congresswomen a “bunch of communists.”

Graham said, “We all know AOC and this crowd are a bunch of communists; they hate Israel, they hate our own country. They’re calling the guards along our border, the Border Patrol agents, concentration camp guards. They accuse people who support Israel of ‘doing it for the Benjamins’. They’re anti-Semitic, they’re anti-America.” (Continued Below)

We leave you with President Trump’s fiery exchange at the White House on Monday: