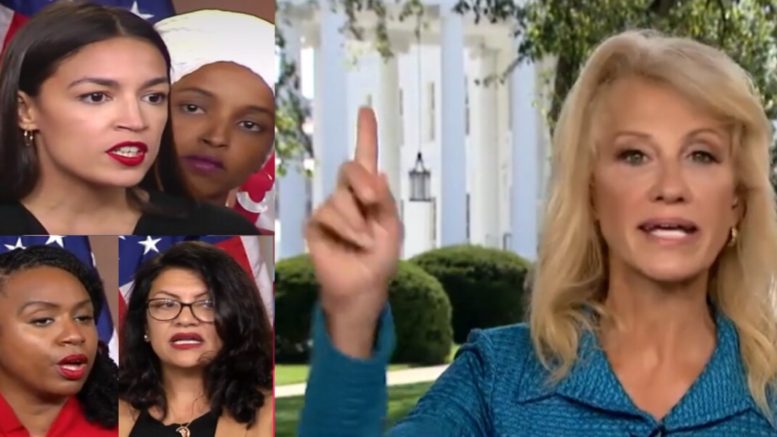 Counselor to the President, Kellyanne Conway, defended the Commander in Chief on Fox News Tuesday, amid the controversy surrounding progressive Democrat freshmen congresswomen

This comes as Democrats prepare to vote in the House on a resolution to condemn the President’s tweets and ahead of a press conference they will hold Tuesday.

The counselor to the President pushed back at the “squad” and said, “These four people in the so-called ‘squad’ that haven’t done squat in Congress, other than pose on magazine covers and go on late-night comedy shows and cause trouble in their own caucus, were ‘under fire’ a couple [of] short days ago by Senior Democrats, elected officials.”

Responding to the Democratic congresswomen’s press conference they held on Monday, Conway said, “It was more like a ‘ga-ga’ in front of a bunch of supplicants that never challenge their factual assertions and just cover anything the four of them say without scrutiny. Ayanna said their squad was ‘more than four people’, but Nancy Pelosi said ‘they’re just four people’. They only have four votes; a glass of water could’ve won their districts.”

Conway pointed out why the Democratic freshmen are “distinctive” and explained: “They’re the only four Democrats to vote against any form of humanitarian aid at the border when that vote was taken two weeks ago. They have no moral authority to ever talk about the border and the kids and the humanitarian crisis there. They’re the only four Democrats who voted against the Democratic package and the package that got signed into law.” (Continued Below)

“They scoff at things like the VA Choice Act, the Whistle Blower and Accountability Act. We’re the ones helping veterans and military in this White House. We’re tired of people not kneeling for the flag, out of disrespect. We’re tired of some of these women palling around with terrorists. One of them is in pictures with somebody who is responsible for the murder of three Isreali soldiers. Where is the press? Stop falling down on the job. Stop being so afraid of and adoring of four people who got here a few short months ago,” Conway expressed.

Asked if the President stands by his tweets, she said, “The President explained what he meant. If you don’t like it here, get out. That goes way beyond these four people. That goes to everybody that is tearing down the American flag and putting up the Mexican flag. That goes for everybody like one of those Congresswomen, who won’t denounce Antifa.” (Continued Below)

Conway mentioned the “resolution” that was brought up in the House in March, that was supposed to be about Ilhan Omar (D-MN) after she made several anti-Semitic statements.

“The House couldn’t even get that right. Why the hell can’t we condemn anti-Semitism? Why can’t we name Ilhan Omar? They’re gonna name President Trump today in their resolution. It’s politicized and it’s a sham, because they couldn’t call out a member of their own who said ‘All about the Benjamins, [and] dual loyalty’, [it’s] some of the most anti-Semitic garbage that we’ve heard in the House floor ever!” Kellyanne fired off.

She doesn’t believe President Trump is a racist and pushed back at an article that her husband, George Conway, wrote in The Washington Post entitled, “I denied that Trump was a racist. Not anymore.”

“I know his heart, I know his actions,” she said of President Trump. “I know how much he has helped people of color, and I go by what people do, not what other people say about them. I’ve been by his side for three years now, and I know who he is. We are sick and tired of people denigrating the American flag, the American military, veterans, and America! People are analogizing a red hat to a swastika… is that where we are now? Have at it, everybody! But keep the cameras and the microphones on, because America should see who they are!” [Emphasized] (Continued Below)

(Related: Kellyanne Conway Renews Attacks On Adam Schiff, Calls On Him To Resign: ‘He Ought To Put Up Or Shut Up!’)