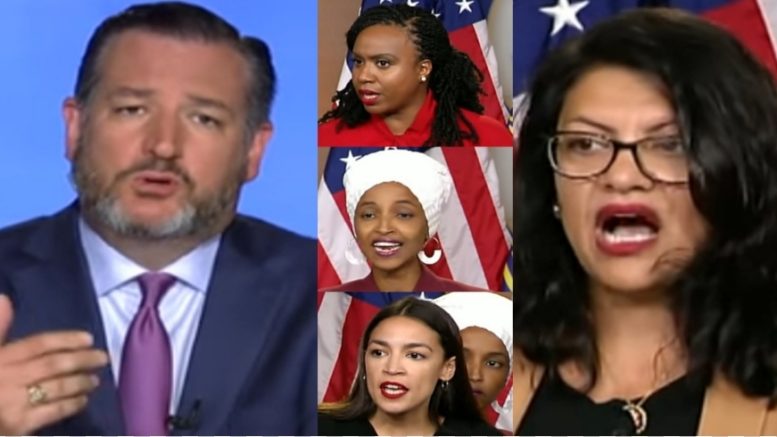 On Tuesday morning, Ted Cruz appeared on Fox, where he gave his take on the current drama surrounding President Trump and the self-proclaimed “squad” of four “Progressive” Congresswomen, the consists of Representatives Pressley, Omar, Ocasio-Cortez and Tlaib.

Cruz is troubled that Democrat leadership has been quick to draw up a resolution against President Trump for suggesting that four Democratic congresswomen should “go back and help fix the totally broken and crime-infested places from which they came” before criticizing policies in the U.S. While, earlier in the year, they failed to specifically target Omar with a resolution after she made Anti-Semetic remarks.

Cruz thinks the actions made out of Democrats suggest that they are “terrified” of the four freshman Democrats, and he provided reasoning for why he feels this way.

Cruz said, “They’re terrified of the radical activists behind those freshman.”

“So, basically, the committee chairs — the Speaker has handed her gavel over to those freshman. The Committee Chairs have handed their gavels over to the freshman,” Cruz added.

“And every one of them are terrified that these freshman will criticize them,” he continued. Video Below

Cruz then brought up the extreme and radical “substance of their record,” and how he thinks it should be talked about more often.

“I think we oughta be talking about the substance of their record — the substance about why they send tweets about minimizing 9/11, and minimizing al Qaeda when they attacked America on 9/11. That’s troubling.” Video Below