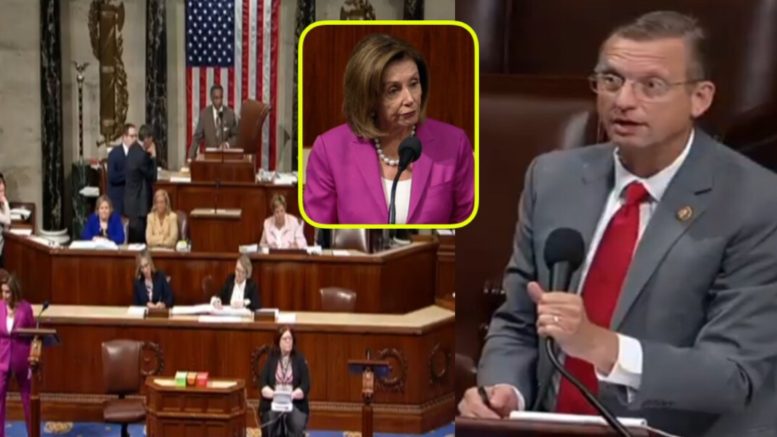 While she was speaking on the floor, Pelosi took a turn aiming her attacks at the President that became personal, to which, Rep. Doug Collins (R-GA) demanded that her words be “taken down.”

The extraordinary rebuke, the first of its kind involving a member of Congress and a speaker of the House in decades, theoretically could result in Pelosi being barred from speaking on the floor for the remainder of the day, as reported by Fox News.

“There is no place anywhere for the President’s words, which are not only divisive, but dangerous — and have legitimized and increased fear and hatred of new Americans and people of color,” Pelosi claimed. “It’s so sad because you would think that there would be a given that we would universally, in this body, just say, ‘Of course. Of course.'”

Pelosi continued, “There’s no excuse for any response to those words but a swift and strong unified condemnation. Every single member of this institution, Democratic and Republican, should join us in condemning the President’s racist tweets. To do anything less would be a shocking rejection of our values, and a shameful abdication of our oath of office to protect the American people. I urge a unanimous vote, and yield back the balance of my time.”

Rep. Collins stood and asked the Speaker if she wanted to “rephrase that comment.” (Continued Below)

Before storming off, Pelosi smugly claimed, “I have cleared my remarks with the parliamentarian before I read them.”

“Can I ask the words be taken down?” Collins asked. “I make a point of order that the gentlewoman’s words are unparliamentary and be taken down.”

For several minutes after Collins’ objection, House members were huddled with the parliamentarian, Thomas J. Wickham Jr., to determine next steps. Wickham’s determination could be overruled by Cleaver or a vote of the full House.

Among other volumes, the House has used Thomas Jefferson’s “Manual of Parliamentary Practice” as a touchstone for House operations even today. Jefferson’s manual stated that House members cannot use language on the floor “which is personally offensive to the President.”

The House also relies on Cannon’s Book of Precedents, authored by the late Missouri Rep. Clarence Cannon, a Democrat. Cannon’s book says that “personal criticism, innuendo, ridicule and terms of opprobrium” are out of the order in the House. (Video Below)