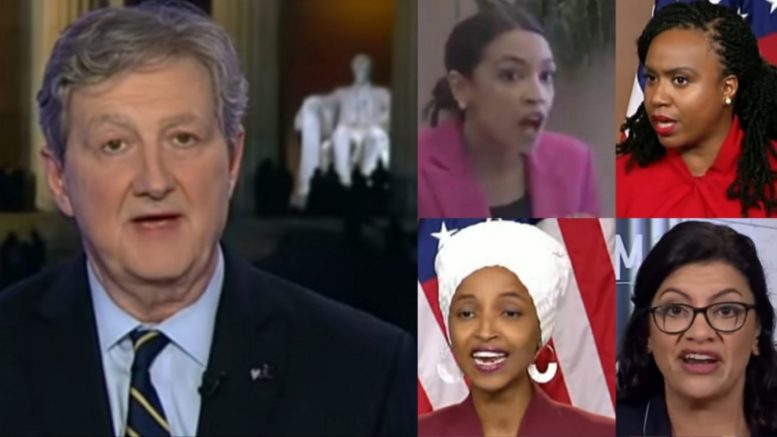 Senator John Kennedy joined Tucker Carlson to vent his thoughts on the drama surrounding President Trump and ‘The Squad’ of four Democrat Congresswomen.

On Tuesday, the House voted primarily along party lines on a resolution condemning President Trump over remarks made against four freshman Democrats, where he suggested they “go back and help fix the totally broken and crime-infested places from which they came” before criticizing policies in the U.S.

Despite the results of the vote, Kennedy said Trump’s remarks were clarified in response to the behavior of the four Congresswomen as meaning: “This is not China, this is America. And, in America, if you hate our country, you are free to leave.”

Kennedy pointed out that the four Congresswomen are entitled to their opinion just like he is entitled to his own opinion.

With that in mind, Kennedy said, “I just think they are left wing cranks, and they’re the reason there are directions on a shampoo bottle. I think we should ignore them.” Video Below

Kennedy believes that the four Congresswomen are “destroying” the Democrat party and moving it even further to the left.

Related Article: Four House Repubs Vote To Condemn Trump’s Remarks Against ‘The Squad’ & They Are None Other Than Reps Hurd, Upton, Brooks & Fitzpatrick

“I’m appalled that so many of our Presidential candidates are falling all over themselves to try to agree with the four horsewomen of the Apocalypse,” Kennedy declared. Video Below