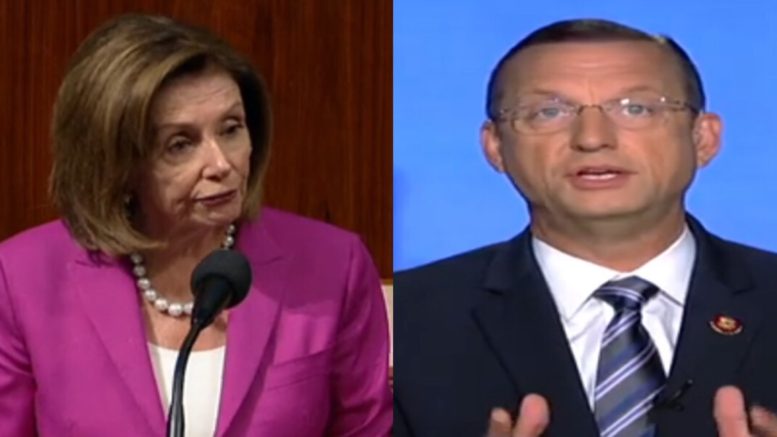 Ranking member of the Judiciary Committee, Rep. Doug Collins (R-GA), spoke with “Fox and Friends” Wednesday where he explained why Speaker Nancy Pelosi’s (D-CA)  speech on the House floor Tuesday was “clearly over the line,” and he defended his decision as to why he demanded her words be “taken down” from the public record.

Speaker Nancy Pelosi was asked by Rep. Collins to “rephrase” her comments, in which, she would not. After Collins’ objection, the Democrat-controlled House voted along party lines not to strike Pelosi’s words from the record and voted separately to restore her speaking privileges. A resolution was then passed to condemn Trump’s “go back” remarks directed toward four freshmen Democratic women.

Collins said he requested Pelosi’s comments to be “taken down” because “they are against how we are frankly, suppose to talk on the House floor. When you come to the House floor, it is a place of dignity, it’s a place of decorum. It’s a place where we debate the most serious issues of our time,” he explained.

“I don’t believe this issue yesterday, this resolution, was there for any other reason except [a] political jab at our President. If we don’t maintain decorum on the House floor, then we evolve into something that we don’t want to be. And [Pelosi] is like everyone else. She is subject to the rules, she broke the rules, and that’s why we did it,” he added. [Emphasized].

Asked if he believes that Pelosi actually cleared her remarks with the Parliamentary and if he knew she was going to “step out of line” ahead of time, he said, “I’m not sure if she did or not. She said she did, but obviously, by using [those] words, she didn’t because it was clearly undone. We have been preparing for this because they’ve been pushing the limits the entire time. When it came to this, it was clearly over the line.” (Continued Below)

“What is sad yesterday for the American people and their political vendetta to get this President, they actually passed a resolution that they ‘cannot read on the floor of the House.’ That shows you how bad this is,” Collins said. “That means they can’t read the title of the resolution, which is exactly what her words were based on– ‘racist tweets.'”

House members cannot use language on the floor “which is personally offensive to the President,” nor can they use  “personal criticism, innuendo, ridicule and terms of opprobrium” towards the President.

“This is nothing but to get the President, to make a mockery of their own leadership abilities, because they don’t like this President,” Collins said. “That’s all this is about.” (Continued Below)

The Georgia Congressman believes that Pelosi could’ve shown leadership in the House, but said, “She did not. She could’ve said she ‘takes down her own words’. But instead, she forced her party to actually join her in violating the House rules so that no punishment is attached. What kind of leadership is that Ms. Pelosi? You’re the Speaker of the House. You’re the one that should be the epitome of the rules and decorum of our House, but yet, you basically made your members vote to allow your words stand and to let you speak again. To me, that just shows the ultimate disrespect of the office she holds.” [Emphasized].

He said their recent rhetoric, especially about border detention facilities, shows the House “is broken right now and why the President is leading.”

“We in the House have to maintain the decorum that we have,” said Collins. (Continued Below)