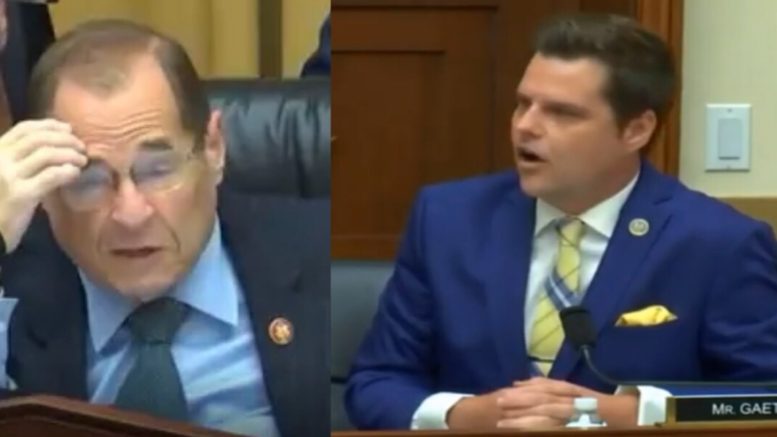 The House Judiciary Committee on Wednesday held a markup for H.R. 3239, the “Humanitarian Standards for Individuals in Customs and Border Protection Custody Act”.

As Rep. Gatez was recognized to explain his purpose for the amendment he offered before the House, the Florida Congressman said, “Thank you, Mr. Chairman. There is a crisis at our southern border. It is a crisis that [Acting DHS] Secretary Mcaleenan shared with this body repeatedly starting back in February. It is a crisis that House Democrats have ignored, and it is even a crisis that the Democratic Whip laughed at. I repeat, laughed at on January 9, when asked if there was a humanitarian crisis.”

“To solve our crisis we need to change our asylum laws. We need to erect physical barriers on the border and we need a common-sense immigration enforcement regime that allows for interior enforcement of our immigration laws for support for customs and border patrol and ICE. These statements didn’t use to be controversial,” Gaetz explained. “Just way back in the 1990s, Democrats included in their official platform that criminal illegal aliens needed to be deported. And obviously, you need the elements of ICE to do that, and you need strong CBP [Customs and Border Patrol] to assure that we have a strong border.”

He continued, “But now, some of the radical left have substantially moved the Democrat Party in a dangerous direction. They say that interior enforcement of our immigration laws is racist. They say that building a wall is racist, but despite the fact that a substantial percentage of brave Americans who work at ICE and CBP are of some of minority status. There are claims that some of these institutions of ICE and CBP are of themselves racist. Those claims are absurd. These are patriot Americans doing all they can to be helpful.”

Gaetz tested the Democrats to see if those on the committee want to actually abolish ICE and Border Control agents by seeing where they actually stand. (Continued Below)

“So I wonder where we are in this Congress? Where are House Democrats? Because as I’ve seen, the new ‘spokespeople’ for the Democratic party, ‘the squad’, stepped forward and called for the abolition of ICE, the abolition of Department of Homeland Security, and the abolition of Customs and Border Patrol. I wonder, what elements of the securing of our border or the enforcement of our immigration laws would any of you even stand to support?” Rep. Gaetz asked.

“So I bring this amendment largely demonstrably to see who among the Democrats on the House Judiciary Committee agree with the most radical fringe on the Democratic left. So, this amendment would do as the ‘squad’ has called for!” Gaetz declared while trying to prove a point of the radical left absurdity. “It would abolish CBP!” [Emphasized]

“And I’d like to know, who among you stand with the brave Americans who toe the line, who work the border, who enforce our laws, and who among you stand with the ‘squad’? I can’t wait to find out, and I certainly hope that my Democratic colleagues will not use procedural maneuvres to block consideration and to figure out which side of the line you’re on,” he added. (Continued Below)

A point of order was called and Rep. Zoe Lofgren (D-CA) said that Gaetz’s amendment is out the scope of the Bill and the manager’s amendment that relates to the conditions of the confinement. “This is far beyond the germane. I would say, however, if it were germane, I would vote against this amendment because obviously, we need to have border control agents and an agency to enforce border security, so I do insist my point of order,” she said.

Chairman Jerry Nadler (D-NY) asked if Gaetz wanted to be heard on his point of order and he sarcastically replied, “I’m sad to see the gentlelady insists on the point of order, but given those remarks, I’ll withdraw the amendment.”

Nadler was in shock and flustered but responded, “Very well. Let me just say that this is well out of order and I’m glad that the gentleman will seek unanimous consent to withdraw it. I doubt anyone would vote for it on this side of the aisle. I think most people think we need border control. The gentleman seeks unanimous consent to withdraw the amendment after having wasting the committees time. Without objection, the amendment is withdrawn.”

However, Rep. Gaetz fired back at Nadler for accusing him of “wasting the committees time”.

“The Chairman of this committee scheduled three hearings on the Mueller Report without providing a fact witness before the committee in the country that could even speak to the Mueller Report. The leadership of this committee seems so focused on this crazy ‘witch hunt’. They’re so unwilling to unbend to the overwhelming will of the American people. 6 of 10 of whom, oppose the opening of an impeachment inquiry– that you continue to waste our time,” Gaetz expressed. [Emphasized]

“You continue to ignore the problems and we will take no lecture from you when it comes to the utility of our contributions to this committee!” he declared. [Emphasized]

Members of the Minority will take NO lecture from the Chairman on wasting this committee’s time.

The leadership of this committee is so focused on this witch hunt instead of working for the American people, THEY have ignored our problems and THEY have wasted our time. pic.twitter.com/qGy1rGctZr

Rep. Gaetz full remarks between him and Nadler begin at 1:08:51 into the video:

(Related: Frustrated Dem Lashes Out After Rep. Gaetz Provides Proof Of The Left’s Hypocrisy: ‘You’re Fed Back Your Own Words From Your Own Leadership’)