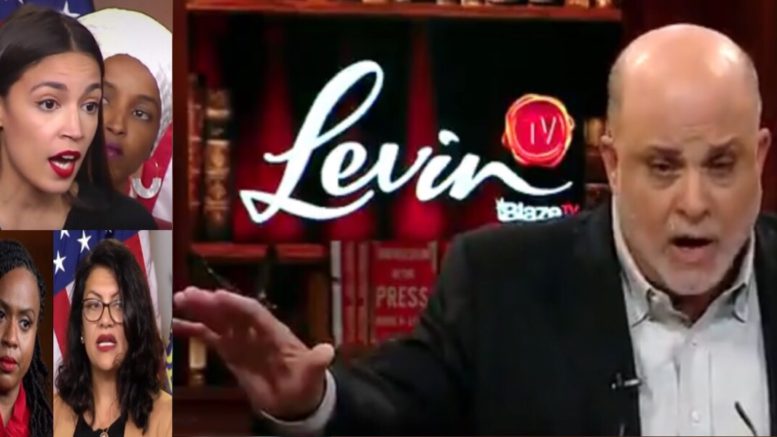 Levin’s remarks come after comments made from President Trump about Omar. Additionally, Levin compared and contrasted the “squad’s” views of Israel to the President’s views to make the case there was much to criticize when it comes to the freshmen congresswomen.

Mark Levin began, “Sean, I want to thank you for having me on tonight as I watch this idiocy that’s taking place in our country. President Trump was addressing the content, of the character of these four women, not the color of their skin. But the media wanted to be otherwise.”

“On the other hand, Omar, Tlaib, AOC, I don’t know this Pressley that well. They are degrading an entire faith, an entire people–Jews, Israelis, an entire country–Israel. So it shouldn’t surprise anybody that their venom for America is same as their venom for Israel and vice versa, that’s typical of the radical hard Left,” Levin said.

“And the evidence is overwhelming that these women are anti-Semite bigots and they don’t hide it. They don’t hide it! The BDS movement, their constant references to Hitler and the Third Reich and concentration camps, they have no knowledge of history. They’ve never visited these sites,” he declared. (Continued Below)

“Their families really have done nothing for this country,” Levin said. “I’m going to be very blunt about it. I don’t know what they’ve done in support of this country, while they rip this great country apart, while we have men and women in uniform of all faiths and all colors in one hellhole after another all over the world trying to defend people and promote freedom.”

He continued, “We have this fifth column in our country, and they’re not alone, the media’s a fifth column too, undermining us at home, while our brave men and women are fighting abroad. So they hate the President because he has two strikes against him. He loves America, and he’s the greatest President that Israel has ever seen.

Levin went on to say, “Recognizing their capital in Jerusalem, moving our embassy to Jerusalem, recognizing sovereignty of Israel over the Golan Heights, kicking the PLO the hell out of our country, cutting off funds for terrorists that are linked to the Palestinian Authority, and it’s driving these three antisemites nuts! That’s what’s going on. (Video Below)

“Now let’s look at Donald Trump’s record when it comes to Muslims and women of color, particularly overseas. Let’s take a look at Syria, where this Commander in Chief ordered attacks on Syria to prevent that regime from gassing women of color, men of color, babies of color, Muslims. It was this President who stepped in, not Obama!”

It’s this President who ordered his military to destroy ISIS and the Caliphate that was killing women of color, men of color, babies of color, Muslims, Yazidis and Christians too, but primarily Muslims.

It’s this Commander-in-Chief that oversees the war in Afghanistan to protect Muslims from the Taliban. That would be men, women, children of color. Now, what the hell of Omar and Tlaib and AOC done for men and women and children of color? Not a damn thing!

Now let’s talk about the southern border. It’s this President who said look– and I didn’t even agree with this, 1-1.2 million individuals who are here illegally, most of them south of the border, from south of the border, I’ll give them legalization, maybe even citizenship if we can cut a deal on immigration. The Democrats said no. Does that sound like a racist to you?

(Related: Levin Lashes Out At Pelosi For Accusing Trump Of Being A Criminal: ‘Nancy Pelosi Is Fascistic’)